Jake Reese had suddenly reappeared on the creek's south bank, sitting on his horse there, silhouetted, his features not quite visible. But his urgent gesture which called for attention was highly visible, with a hurried pumping of his arm which cried danger. He pointed, arm stabbing, violently, and another turn by Burnett showed what could be the beginning of the end for them all.

The plot for this hard-boiled western by Frank Castle is fairly simple. Dain Burnett has tracked down one of the two people that robbed, tortured and killed his younger brother of $15,000. The pair of swindlers were a couple of con artists named Rupert Kinnick and Norma Young. In an attempt to flee to Mexico the two killers, Kinnick and Young, were hiding among a wagon party that was massacred by a band of Comanches, leaving Kinnick dead. Norma Young, however manages to escape only to be "rescued" by Dain Burnett, who has been on their trail. Burnett's mission is to take Norma Young back to the nearest jury and see to it she hangs for the murder of his brother.

Seems like an easy thing to do, right? Well...not so fast. Of course as things must go, Norma Young turns out to be stunningly gorgeous and vulnerable. And she has no idea that the man who rescued her is the brother of the man she's accused of killing. To complicate things further, the Burnett and Norma are in the middle of nowhere with a war party of Indians on their trail. Lucky for them, a certain Jake Reese shows up to aid them in their plight. Jake Reese is one of those frontier types who once lived among the Apaches and knows the ways of the Native American. He has a knack for coming and going like a shadow in the night. But because he's white, his life is in just as much danger as Burnett and Norma's lives.

To add further trouble, our three survivors meet up with a party of union soldiers accompanied by two shady characters named Phil Ainslie and Mose Jobe.

Both of them civilians; the one in the lead had a gambler's look about him, pale features and jet-black hair, a thin mustache, dandified gear which received much hard wear. The other was grossly fat, with porcine features, dressed like a ragpicker, his clothes greasy black, as though they had not been off him in a month.

Burnett is immediately wary of Ainslie and Jobe, especially after Ainslie seems to recognize Norma Young from Albuquerque. Ainslie is constantly setting himself upon Norma, conversing in hushed tones. Norma seems to want no part of Ainslie's attentions. Jobe is just an outright psychotic, and has a knack for raping and killing and collecting scalps. He'd like nothing more than to add Norma's hair to his collection. As the nights progress, the party of soldiers are picked off one by one, with blame being put on the Indians following them. Other nights are spent fending off raids from warring Comanches.

Burnett pretty much goes through a gauntlet of bullets, arrows, knives and fists in this book. There is treachery and violence in just about every chapter. I'm trying to remember if I've read any of Frank Castle's novels besides this one. I've got three of them in my collection of paperback westerns. The other two are MOVE ALONG, STRANGER and FORT DESPERATION, both them Gold Medal paperbacks as well. If they're as good as this one is, I'm looking forward to saddling up.

Wendy was a pretty little head, all right. A little on the hard side when you looked close and the make-up didn't take away the brittle lines that were etched in the corner of her mouth and eyes. She was a million bucks in a green dress under artificial lights and two million in bed. A dime a dozen in the daytime though.

Oh snap! That's a mean thing to say about Wendy! But that's how it goes for dames in Mickey Spillane's world. I'm trying to remember now if any of the dames in this novel were called Kitten. I don't think so. That's a name Mike Hammer uses for his babes. And as most of you probably know, Mike Hammer ain't in this hardboiled soap opera from 1951.

As plots go, this one features the old reliable amnesia gimmick for its fuel. Our hero, Johnny McBride returns to Lyncastle, a burg a couple connections from Chicago, to right some wrongs and clear his name. In order to accomplish this, he promises the reader that he's kill someone, break someone else's arms, and a third person will "get a beating that would leave the marks of the lash striped across the skin for all the years left to live." Oh and that last one is a woman. So yeah, Johnny McBride ain't fooling around!

So Johnny pulls into town by bus on the first page. Next thing he knows he's getting the bum's rush by a copper. But Johnny's planned ahead. His plans and a nice fat roll of dough get him into a swanky hotel. But it's not a day he's in town before he's hauled in by the cops for murder. This is after a couple of punches get thrown and someone gets kicked in the stomach and pukes and another gets a belt in the teeth and...well, after things settle down, the cops are dismayed to learn they can't hold Johnny for squat because he's got no fingerprints. That's right, he's got no fingerprints!

Did I mention this novel is one loopy ride? Didn't the amnesia hint give that away? Well trust me, it's a doozy, because Johnny McBride really isn't really Johnny McBride. He's really a guy named George Wilson, who was a pal of the real Johnny McBride after Johnny went on the lam for being accused of stealing $200 grand from the bank he worked at in Lyncastle. In addition to robbing the bank, he was also accused of gunning down District Attorney Bob Minnow. It seems McBride was believed to have killed Minnow because Minnow was going to arrest him for the bank theft. So after shooting DA Minnow, McBride hauls ass out of Lyncastle for parts unknown. But first he leaves the gun with his prints all over it at the murder scene. So, you'd think that is it for Johnny, only now, the cops can't hold him for murder because he doesn't have fingerprints anymore. So they have to settle for tailing him around Lyncastle as he tries to clear his own name.

Yeah, you kind of have to forgive a lot of stuff that makes no sense to enjoy this novel. Anyway, George Wilson, now assuming McBride's identity (because he's McBride's exact double and all) gets dope on a cat named Lenny Servo, who seems to deal all the cards from the stacked deck in Lyncastle. There's also a missing chick named Vera West, who was Johnny's girlfriend and coworker at the bank Johnny supposedly robbed. Johnny's after Vera because he's convinced that Vera had him set up for the bank job because afterward Vera hooked up with Lenny Servo. All this background stuff is revealed through a bunch of punching and teeth-kicking. And with people taking potshots at Johnny whenever suitable.

The novel is violent as hell and moves at a crazy pace. Johnny gets beaten up a lot and has a lot dames throwing themselves at him all the while. It's exactly what I would expect when I open a Mickey Spillane novel. You're going to be entertained and given your $1.95's worth. And you know you like this stuff anyway. Who wouldn't? 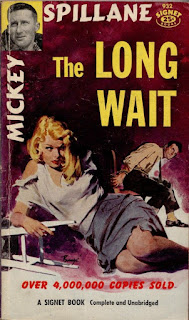 The wire mesh fence slumped as if the signs were too heavy for it. At one point it lay like a rusty circus net. It sprang like a circus net when he stepped across it. In the shadow of the Chute he found the place where Fox Olsen had died. Crude chalk outline on the planks....In the stinking dark forest of splintery posts under the pier lay pizza tins, beer cans, cigarette wrappers, condoms--the joyless detritus of American joy.

I've heard good things about the Dave Brandstetter series for years and I own a couple of the early ones thanks to used book sales around the town. Some years ago I lent the whole set I had to a friend who was moving to Mexico. Since then I've got them all back and none the worse for wear. It's good to have friends who take care of books. Anyway, I finally read the first novel in the series by Joseph Hansen and am happy to tell you the good things I've heard were justified.

This isn't your standard California detective mystery, as the blurbs on my edition would have you believe. One even refers to Hansen as "a worthy successor" to Hammett. Well, Hansen and Hammett have names that begin with H, but that's about it for comparing the two as far as I'm concerned. This is a moodier, measured novel than Hammett's novels are. Dave Brandstetter is an insurance investigator, not a private eye, and is mourning the loss of a loved one as the novel begins. You don't get the feeling that Brandstetter is a "shoot first and ask questions later" type of guy.

The mystery concerns a missing person named Fox Olsen. It appears, to Brandstetter anyway, to be a staged car accident off a bridge in the rain instead of accidental death. Something just like the cover shows above. No body is found and before any life insurance is going to be doled out to the beneficiaries, Brandstetter has to verify that our missing and supposedly dead Fox Olsen isn't trying to pull a scam for the insurance money. Still, Olsen seemed happy enough, and successful enough in town with his popular radio show. So why take the fade-out?

The more Brandstetter probes the life of Fox Olsen the deeper things get. For one thing, Fox Olsen was a frustrated artist and writer. Add to that a marriage that harbored infidelity. To further complicate matters, an old friend of Olsen's returns after 20 years to rekindle a relationship the two had before Olsen joined the Air Force.

The novel was published in 1969, and I would imagine the gay themes, in addition to a gay detective protagonist were pretty controversial at the time. The mystery of the relationship doesn't take long for Brandstetter or the reader to figure out, especially to a modern reader.

I liked the novel and would recommend it to readers who enjoy the Lew Archer mysteries. Also for readers who don't mind a more poetic depiction of a time in California that you don't see in 60's news-reels. I have the next four novels in the series and am looking forward to reading them. I understand that the as the series progresses so does Brandstetter in age and maturity. I believe they're still in print and available in e-format. I also see that there is a single edition of all twelve Brandstetter novels available through third-party sellers, but the price is a bit steep for that one.
Posted by Kurt at 5:30 PM No comments: