Sheila stood up tall, a growl rumbling deep in her throat. She saw Remo and smiled, a broad predator's smile, that expressed neither happiness nor joy, merely satisfaction over finding the next meal so neatly served.

I've read a handful of Destroyer books by Richard Sapir and Warren Murphy and I think they're fine as entertainment. But none have really stuck with me, and I'm not a huge fan of the goofy banter that goes on between Chiun and Remo for much of the adventures. But I did like this one a lot, from the goofy cover to the pulpy creature-feature story inside. Killer Chromosomes reminded me of The Wasp Woman (1959) in many ways. Completely different story, of course, but mainly for its spirit. I haven't seen The Wasp Woman in a couple of decades, so it could just be an onset of senility dredging up its memory while reading Killer Chromosomes.

The novel begins at a press conference of sorts, as Dr. Sheila Feinberg attempts to explain research she's doing involving human genetics and chromosomes. Her goal is to improve the human condition somehow. Her audience is none too pleased with her work, fearing that messing around with human genetics is the surest way to bad things like "plagues and monsters" and other scary stuff. In this case, their fears are sort of realized, as in frustration Dr. Feinberg consumes a couple of test-tubes of the stuff she's been tinkering with in her laboratory. Yup, bad things then happen as our lady mad scientist turns into a "she-tiger" like creature who feeds on human flesh! She also changes appearance into a smoking hot babe in the process. The result of her feeding is that victims remaining alive afterward themselves turn into hybrid creatures who will feed in turn. So, yes, in no time flat our fat and dopey citizens will turn into hordes of flesh-eating tiger-men (and tiger-women) running rampant. Call on Remo Williams to put a stop to it all, somehow.

Remo approaches the mission with the typical sardonic wit and nonchalance that we're used to from him. Only he's never come up against anyone quite like Dr. Sheila Feinberg. Nor has she ever met anyone near like Remo Williams. And when they meet for the first, believe me, fur flies! Remo barely manages to survive, as Sheila Feinberg escapes, licking her own wounds and harboring a burning desire to mate with our hero and have his litter.

As Remo convalesces in hiding he begins to revert back to the dullard, slack ways of your average out-of-shape lummox that Chiun despises. The art of Sinanju seems to evaporate from his control, causing Chiun to consider pulling Remo out of the game entirely. Meanwhile, Dr. Sheila Feinberg is in heat and stalking her pray, and will stop at nothing to get him.

Yeah, it's all pretty goofy, but I liked it. I liked it enough that I'll give more novels in the Destroyer series a go. After all, they were and still are hugely popular among a legion of fans. They're even available in e-format for newer readers who missed out finding the original books in the newstands.
Posted by Kurt at 11:21 AM No comments:

"She's a special kind of broad," Joker quoted. "A whore with a code of ethics." 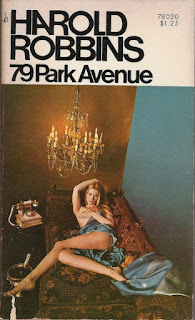 D'ya miss me out there? It's been a while since I've made a post, but I've been itching to get back here. It wasn't like I wasn't keeping up with trashy good fun, but October and November has been crazy busy for me. But you don't care about that, you're here because of the babe on the cover above, right? I'm sorry that I don't have this issue of the 79 Park Avenue by our pal Harold Robbins. I have the Pocket Books edition instead, printed in the 80's I think. The novel itself is one of Harold Robbins's earlier ones, first published in 1955, back when he had to keep the sleaze and language in check. No one in this novel gets called the "c" word, which is a nice change from some of his later novels. Also the sex, while there is a lot of it, is delivered in "fade-to-black" type of scenes. Still, the novel is risque enough for its time, and is a whole lotta melodrama to boot.

The story here is all about Maryann Flood, often referred to as a "hot-blooded polack" by some of her lower-class gentlemen friends. Maryann is on trial for running a high class escort service through Park Avenue Models, Inc., The girls of Park Avenue Models, Inc. are available for photography jobs, art exhibits, showrooms, runways, etc, but the real revenue comes from what the girls will do for their well-heeled clients behind closed doors. Everything is cool until one of the models dies in the hospital from a botched abortion. An investigation into the young woman's background leads officials back to Maryann Flood, president of Park Avenue Models, Inc. The book begins as Maryann is on trial for running a house of prostitution, bribery, and extortion. And, as things tend to go in books by Robbins, the lead prosecutor, Mike Keyes, just happens to be the same guy who was head-over-heels for Marja (Maryann) back when they were teenagers growing up together in the slums.

You know the drill. Boy from the slums makes good, girl from the slums goes bad. Only Marja isn't really the bad girl everyone has made her out to be. We get her story through three main sections of the novel. Her teenage years, her young adult years as she makes a living as a stripper and escort, and her mature years as the widow of a mobster with an escort agency of her own.

Marja quickly learns that a girl with no prospects has to take advantage of the stuff God gave her, if she wants to get anything out of life. Her stepfather is one of those creeps who always manages to spy on her as she's undressing, the guys at school are only interested in her for one thing, and her new boyfriend Ross doesn't seem to give a damn about her unless she's around to make him look like a bigshot in front of his hoodlum friends. What's a girl do? Meanwhile, there is Mike Keyes, working at the newstand and studying his schoolbooks all the time, pining away for Marja. Trouble is, Marja is dating his bigshot pal Ross. Only what Mike Keyes doesn't know is Marja digs Mike right back. Ah, teenage love. And things go like this, with Marja building a rep for being a fast girl, working as a dancing girl for extra bread, dating Ross, being friends with Mike and dodging her creepy stepfather's advances until one terrible night when she's raped by her stepfather. Marja reacts like any tough chick would, and cuts the bastard up with a razor. And is promptly shipped off to a reform school.

Part two of the novel picks up after Marja is released from reform school. She hooks up with another girl, Evelyn, who also did time in the reform school, and together with Evelyn's sleazy boyfriend Joe, head south to Florida for sun and fun. Evelyn and Marja (now known as Mary) have this little lesbian act in the burlesque circuit going that brings in the dough for Joe to spend. They honed the act together in reform school trying to cool their jets from not having any boys around for attention. Mary gets tired of the scene with Evelyn and Joe and meets a rich playboy named Gordon Payne one day on the beach. Gordon flips for Mary. He doesn't care that she works nights and seems to have no history. None of that matters to him. He's in love L-U-V and he wastes no time in proposing to Mary. Mary considers Gordon's proposal, remembering her love for Mike Keyes back in New York, and all, but decides things aren't going to get any better than they would with Gordon. What the hell, she'll be in the society pages and no more riding the sleazy strip circuit with Evelyn and Joe. The thing is, Evelyn and Joe got other ideas, like maybe a little blackmail from our rich and foolish playboy. They show up with pictures of Mary and Evelyn together, thinking that Gordon might be willing to by them for safekeeping from the society pages. And just like that, Mary's life with Gordon goes up in smoke. Left high in dry in Miami, she resorts to escort jobs to earn her way back to New York, where she's quickly busted by a vice detective for prostitution.

Part three of the novel brings Ross and the gang back. Ross is working his way up in the syndicate, and still has the hots for Marja. Mike is overseas doing the soldier-boy gig, fighting Hitler. Marja knows the score, and a girl's gotta eat you know, so she eases herself into gigs as a call girl. Ross has a stake in a new playground in Nevada, this little town called Las Vegas. Only Ross has been burning bridges and blowing dough from his pals in the syndicate. It's in this 3rd part of the novel that Robbins seems to have grown tired of the book, and collapses events up into a series of quick scenes of convenience. The characters get thinner and the dialog carries the tale. Everyone gets slapped a lot, and a couple of people get killed off. All of which leading to the final scenes in the trial which kicked the book off. We never really see Marja as president of Park Avenue Models, Inc. It's as if Robbins was ready to pack the story in and get it off to the publisher.

All in all, pretty much what you'd expect from an early Robbins novel. It ain't Faulkner by any means. The novel also made it into a mini-series back in the seventies. I remember it on TV but never watched it. Don't know if it's available online.