The Case of the Vagabond Virgin

Out of the more than 100 Perry Mason novels, I think I've read about a dozen. I've yet to be disappointed in them, forgiving the thin characters and the sometimes repetitive dialog. Instead I admire the puzzles and the twists, just like any other whodunit fan out there would. Oh, and not to mention the usually wonderful covers these capers came wrapped in.

Published in 1948, The Case of the Vagabond Virgin is sort of a neat little case, in which Mason's client, John Racer Addison, picks up cute little hitchhiker, Veronica Dale (the vagabond virgin of the title) and winds up being charged with the murder of his business partner, Edgar Z. Ferrell. Veronica has a knack for making men fall all over themselves in fatherly devotion to the protection of her innocence, in spite of the fact that she's got this habit of picking up rides with strangers. Addison, a wealthy manager of a department store, is no different. He's a blowhard, pompous, arrogant, pushy, and a dunce when it comes to babes like the "virginal" Veronica Dale. Also in the mix is a sleazy little blackmailer named Eric Hansell, who seems to conveniently know just the opportunity needed to put the squeeze on guys like Addison. The case follows some pretty typical twists, involving forged checks, an impostor, confusing timelines, tricky business transactions, and a couple of dames who have no problem lying through their lipstick. And of course, the neat courtroom shenanigans that these books are famous for.

Mason has been around forever in books, movies, and television. I can't help but see Raymond Burr as Mason whenever reading one of the novels. Same with William Hopper as Paul Drake. But I'll admit that I have to force myself to envision someone besides Barbara Hale when it comes to Mason's assistant, Della Street. Hale never did it for me in the TV shows. Instead I'd rather picture a babe more resembling Modesty Blaise. It's an effort, but I'm up to the task.

Now this would be a Della Street no guy could ignore!

Email ThisBlogThis!Share to TwitterShare to FacebookShare to Pinterest
Labels: paperbacks

Scenes of the future that never was...

Collection of cool science fiction paperbacks that I've recently purchased. I love covers like these and wish there were more of them in my library. One of the most annoying things some booksellers do is paste their price stickers on them, which was the case with a couple of these. That's why the scarring on the cover of Get Out of my Sky. Thankfully, that didn't happen to any of the others. Paperbacks like these are wonderful old soldiers, that have survived decades in the desert, beaches, pools, winters, summers, planes trains and highways of America. 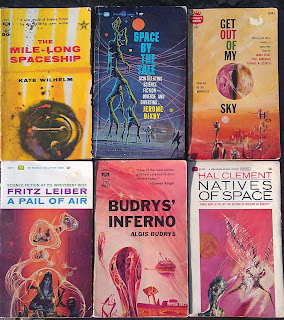 Away and Beyond - A.E. van Vogt

A.E. van Vogt is at his best in small doses. I've given some of his "novels" a go and typically bail on them before the halfway point. The problem, as has been well documented by way more scholarly types than myself, is that the novels are patch-worked up from previously published stories, often resulting in a confusing mess. Yes, moments of pulp glory will occasionally "pop!" (with exclamation points added just in case you're dozing off) but not to the benefit of a particularly enjoyable reading experience.

His short stories are where he shines, glitters, pops and zooms at his best. You can usually get through them fast enough without thinking about them too hard. Which is a good thing. They don't stand up to critical scrutiny at all. There is all sorts of cool shit happening, but not a hell of a lot of it ever makes any sense.

I picked up this collection, along with a couple other vintage science fiction collections, for the measly price of a buck at a store closing down business. I'd read a few of van Vogt's stories in other collections, and outside of "Black Destroyer" and "Vault of the Beast" don't remember any of them. This collection opens with "Vault of the Beast" which I hadn't read in more than 30 years. I have to admit that the beginning of the tale really hooks you, where we meet a stowaway alien aboard a space freighter returning to earth. If you've seen The Terminator 2 you've got a pretty good idea of what the alien is capable of. And here in 1940 he's just as murderous in his mission to find a mathematician from Earth who can solve a riddle of the ultimate prime number, which will release a godlike alien trapped in a massive vault on Mars. Got it?

"The Great Engine" is about a war veteran who finds a piece of what may be part of an engine that propels a starship. There is government conspiracies in this one that get a little flaky, and something of a love story as well. "The Great Judge" is one of those tales that take place in a future Utopia where freedom of thought is frowned upon. "Secret Unattainable" is probably the best story in the book, told through a series of letters and correspondence about a scientist building the ultimate weapon for the Nazis in WWII. A.E. van Vogt has a tendency to shift POVs and scenes unexpectedly with jarring effects. Here in "Secret Unattainable" that habit is nullified by the epistolary method used. "The Harmonizer" is an alien plant, I think, but I wouldn't swear on it because I bailed out early. Maybe I'll go back and finish it. Same with "Heir Unapparent" where a galactic emperor has been poisoned by someone in his court. I didn't really care, so I didn't hang with the story. "The Second Solution" is reminiscent of "Black Destroyer" with a telepathic alien "monster" and her offspring stowing away on an Earthbound spaceship. There is reference made to a war with the Rulls, a wormlike like race of invaders wherein the ezwals, telepathic monsters like the ones on the spaceship, could possibly serve as allies and...oh, don't think about it too much...just dig the chase and bloodshed instead. "Film Library" is a "Twilight Zone" kind of story where short movies in 1946 somehow get switched for movies made in 2011. It's kind of fun, and ends with a scientific sounding gobbledy-gook explanation of how time is relative to a moment here and simultaneously somewhen else and...yeah, it's really not important. "Asylum" is pure pulp fever-dream with space vampires and horny babes, and bloodsucking and alien chases, and suppressed identity hoohaw that is pulled out of the air. It's long, but short enough to not fall apart.

That's the deal with this collection. A.E. van Vogt's books and stories are really easy to find in used bookshops. He remained in print well into the 70's. Maybe there was a lot of nostalgia for the pulp adventure and wonders of his his stories. Sophisticated readers today can appreciate their place in the genre's history. Other readers will be bored and unimpressed. You just got to be in the mood for them, and you'll have fun. Like candy, best in small doses.
Posted by Kurt at 3:32 PM No comments: