Any fan of Science Fiction paperbacks from the 70s will recognize the work by Gene Szafran (11 April 1941 - 8 January 2011). His work graced a series of paperbacks by Robert Heinlein, Robert Silverberg and dozens of others. Below are three covers from my personal bookshelf of his covers. And I'm going to admit that I bought these three books purely based on the covers. Not that I wouldn't have bought the Richard Matheson collection anyway. I think they're a nice example of some sexy psychedelia - barring the silhouette of the middle-aged cat on Vital Parts. 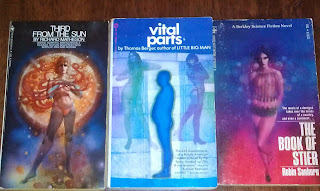 Again, my crappy photography doesn't do the covers justice. If you're interested in seeing a whole lot more of Gene Szafran's work, check out the link provided.
Posted by Kurt at 9:31 PM No comments: 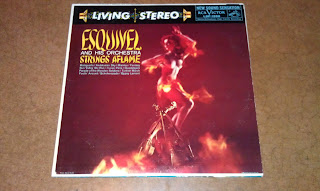 The character was created back in 1939 and made famous by science fiction writer Edmond Hamilton. Captain future is the brilliant orphan, Curtis Newton, born on the moon to parents Elaine and Roger Newton. Curtis's parents had moved to the lunar surface, along with Roger Newton's partner Simon Wright, to do their research in isolation, leaving behind the hassles and power struggles that prevailed on Earth. Events turn against them in the form of evil Victor Kaslan, who murders Curt Newtons parents.

Curtis Newton is then raised by android Otho, a giant robot named Grag, and The Brain, the disembodied brain of Simon Wright, floating in case of transparent metal complete with lenses for eyes, and electrodes for hearing. Curtis Newton is raised under a vigorous regimen, not unlike another pulp hero Clark Savage, Jr. to grow up to became hero of the universe, Captain Future! 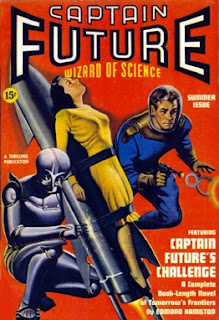 Captain Future starred in his own pulp magazine, shown above, from 1940 to 1944, when he moved to star in Startling Stories for a series of shorter adventures from 1945 to 1951. Later, in the 1960s, Popular Library reissued some of Captain Future's adventures in paperback. I picked up three of these paperbacks earlier this summer at a used bookstore in Mesa. 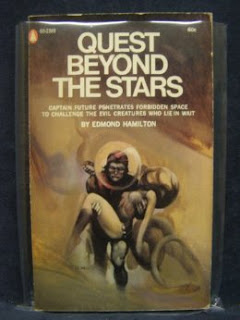 I read Quest Beyond the Stars over the weekend and got pretty much what I expected out of it; that is, an entertaining, old-fashioned, adventure in space kind of story. The plot could have easily been a western or a sea adventure story. These were most likely written with adolescent readers in mind. Nothing too racy or violent, with the usual imaginative awe that Edmond Hamilton is known for.

Later, in 1978, Captain Future was an Anime hero that ran for 52 episodes, according to Wikipedia. I've not seen any of these episodes, nor was I even aware they existed until I decided to do this post. Nor did I realized that's Captain Future on a wall poster in Leonard's and Sheldon's apartment on The Big Bang Theory. Goes to show, old Captain Future really gets around.

The original pulp stories are readily available for e-readers. No reason fans of pulp heroes wouldn't enjoy them today.
Posted by Kurt at 12:25 PM No comments: