Man, it's been a while since I've done a post here. Things busy around my corner of the universe. In the past couple weeks I've been doing job interviews, and have found out just yesterday that I'll be starting a new job in March, which is going to be kind of exciting.

I've picked up a couple of new records, some cool books and some old pulp mags in the past few weeks. I thought I'd post the 3 of the pulp magazines here.

The first one is the April 1958 issue of Super-Science Fiction a cover by Ed Emshwiller (Emsh) showing a space Amazon babe decked out in all her battle glory. 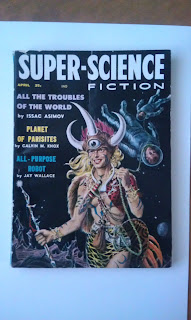 The authors inside include Isaac Asimov, Robert Silverberg and Harlan Ellison. The cover story is "Planet of Parasites" by Calvin M. Knox. I don't know anything about Knox, but I'll be giving the stories here a shot. I love old 50s Science Fiction so I'm thinking most of these stories will be entertaining.

The next two magazines are Other Worlds Science Stories (November 1950) and Fantastic Science Fiction from June 1956. 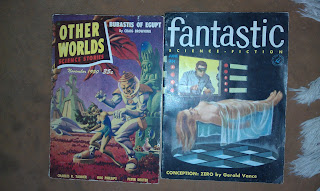 The cover painting for Other Worlds is by Hannes Bok and depicts a scene from the lead story, "Bubastis of Egupt" by Craig Browning. I wish my crappy photo could show the vibrant colors, but at least you get the idea here. The cover for Fantastic is by Edward Valigursky for the story "Conception: Zero" by Gerald Vance. "Conception: Zero" is kind of interesting in that it addresses the Earth's population explosion in the future, where it is against the law for a woman to conceive a child without express permission from the government. Most women have undergone a forced sterilization procedure, and those that have not are considered outlaws. Fantastic Science Fiction was edited by Howard Browne, who wrote some really good detective novels in the 40s: Halo in Brass, Halo for Satan, and Halo in Blood. He also wrote a good mystery, Thin Air which is probably not hard to find. I've read two of the Halo books and Thin Air and can recommend them easily. Authors in Other Worlds include Rog Phillips, Charles R. Tanner and Peter Dexter. Fantastic contains stories by Robert Silverberg, Milton Lessor and Karl Stanley.

I picked up all three pulps shown here for a grand total of $15, or $5 each. All of them are digest size and great reading copies, with no tears and covers falling off. Should be some fun reading ahead.
Posted by Kurt at 11:01 AM No comments:

The Legion of Time

More good old stuff from the glory days of pulp. The Legion of Time by Jack Williamson is two novellas in one and presented under the title shown here. I've read a bunch of Jack Williamson's stories over the years and haven't come across one yet that I didn't like.

The story is pure pulp adventure, in which our hero, Dennis Lanning, is chosen as the man who can save the future utopia of Jonbar, or fail, letting Earth turn into a wasted land of tyranny and death under the dark realm of Gyronchi. To add to the dilemma is that each possible realm is home to stunning beauties; Lethonee of Jonbar, and Sorainya, queen of Gyronchi. Each appears in turn to Dennis, urging him to follow his fate. Evil queen Sorainya adds spice to her visits by luring him with lust and power as she poses half naked in red and black armor. The cover above illustrates one such visit, as she travels time on sort of a half-shell, beckoning Dennis to join her and rule with her as King of Gyonchi. Lethonee mostly appears as sort of a virgin princess of Utopia. She doesn't sound all that much fun, if you ask me, but she certainly gets Dennis Lanning all worked up. Sorainya is the real star of the show when it comes to temptation. Her beauty is so great that no man, it seems, can force himself to defeat her, given the opportunity. The thrust of the story is that Dennis and his team of "time travelers" must insure that a certain event that takes place in the Ozarks involving a boy, a magnet and a pebble. If it doesn't, then the future of Earth, not to mention Jonbar and the beautiful Lethonee is doomed to never exist. Yes, it sounds wild, and it is. There are giant antman warriors, torture dungeons, bloody battles, sex (pulp-style from the 1930s version thereof) and mindblowing tricks of time travel.

Williamson's stories from this period are vibrant, colorful, poetic and pure pulp storytelling. The science, such as it is, gets wonky, but I could care less. It's the tale that counts and Williamson was one of the best and instilling a sense of wonder and adventure that fans of pulp look for.

There is a second part to The Legion of Time that I have yet to read called After Worlds End. As soon as I do, I'll be posting about it here.

Richard and Mimi Farina put out two good albums on Vanguard Records with some pretty interesting music. I'm not the biggest fan of folk music around, but sometimes I get in the mood for it. This song "Reno Nevada" can be found on their album Celebrations for a Grey Day, released in 1965.

Richard Farina is most well known today for his novel Been Down So Long it Looks Like Up to Me published in 1966. Mimi Farina was Joan Baez's younger sister. The two married in 1963. Farina was good friends with writer Thomas Pynchon, who dedicated his novel Gravity's Rainbow to Farina. Farina died at the age of 29 in a motorcycle accident just after the release of his only novel.

I found both albums by Richard and Mimi Farina for inexpensive prices at a used record store. I would imagine anyone looking to pick them up would find them easily enough. Farina's novel is also still in print and is worth reading as a sort of bridge between the Beats of the 1950's and the Hippies of the 1960's.

From their 1968 album A Giant Crab Comes Forth on Uni Records, here is "It Started With A Little Kiss" by Ernie Orosco.

The album was produced by Bill Homes. This is the 2nd song on side one of the record, right after an intro monologue by Johnny Fairchild. The album was dedicated to Johnny Fairchild, music director of radio K.I.S.T. of Santa Barbara California, in thanks for his encouragement to Giant Crab and other "psych" artists of the day like Strawberry Alarm Clock and The Music Machine, Bobby Fuller and "countless other groups and people." Clearly this was back in a time where radio programs weren't designed by corporate bean counters.

I understand there was a release of this record on CD. I found it on vinyl at a Zia Record store in Phoenix and was quite happy about it. This song is a good representation of the album as a whole, with its multiple instruments and bright sounding psych-pop. Enjoy.

The Scarred Man by Basil Heatter is one of those later Gold Medal paperbacks that took the elements of vengeance, juvenile delinquency, hippies, drugs and motorcycle gangs and wrapped them into a tight novel of suspense about a regular guy pushed to the extremes. This book would have made a great grindhouse motorcycle gang drive-in flick in the 70s.

The plot is simple; Lawyer William Shaw and his wife, Stacey, take a vacation to Florida, where Shaw purchases a small yacht with thoughts of sailing to the Bahamas. One day, he and Stacy rent a Honda scooter to tour the glades. They’re attacked by three bikers, raping Stacey and beating Shaw to near death. Shaw and Stacey survive the attack but Stacey is left psychologically damaged beyond repair, and commits suicide one bright morning by leaping from a Miami Beach hotel room to her death. Shaw quits his job, and stays in Florida in hopes of finding the bastards that killed Stacey. He takes a job defending several members of a motorcycle gang known as The Beaks for a hit-and-run, and in the process manages to gain their grudging respect. He is invited by a rider named Stud to go out for an afternoon ride, where he learns that Stud just happens to be one of the three punks involved in the attack on him and Stacey. Before killing Stud, Shaw manages to extract the names of the other two bikers involved. And the hunt begins.

It’s a pretty cool novel. We follow Shaw as he buys a Harley and rides independent, looking for his prey. “Was I with the Angels, the Beaks, the Rockers, Werewolves, Zombies, or whatever? There were no swastikas or death’s heads on my back, and I was really too old to make the scene. A loner then, a middle-aged dropout or freak. A day-glo crazy without the colors. But no one cared. There were so many. What was one more?” He travels to New York State and joins a horde of bikers descending on a small northern town, and we watch as he slowly becomes one with the pack “[we] could not help but feel that we were a breed apart.” Along the way he meets a chick named Pearly, who is looking for kicks and anyone handy that will provide them for her. Shaw nearly takes the offer, before remembering Stacey and his mission of vengeance. Eventually, he renews his purpose in finding and killing the other two bikers on his list. But like all simple plans, nothing goes as it should.

It’s the first novel by Basil Heatter that I’ve read and I’ll definitely be keeping an eye out for any others by him as I haunt old bookshelves from now on. Cool stuff.