Why defy me, who am Kathulos, the Sorcerer, great even in the days of the old empire? Today, invincible! A magician, a scientist, among ignorant savages! Ha ha!

Howard does homage to Sax Rohmer with a nod to the Cthulhu myths of H.P. Lovecraft in his novelette, "Skull-Face", which first appeared in Weird Tales in October, November and December of 1929. His most famous creation, Conan, was in the wings, yet to be published. Readers of Weird Tales had already been introduced to his other characters, Kull and Solomon Kane. 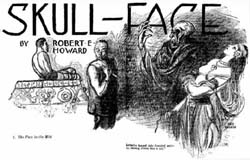 The story kicks off with a hashish dream, where our hero, Stephen Costigan, lies strung out in an opium den named Yun Shatu's Temple of Dreams. In the dream, Costigan sees what is described as a yellow skull, reptilian in shape, talons for fingers, eyes blazing in deep sockets staring down at him. The skull observes that Costigan makes for an interesting specimen. Behind the skull, Costigan sees a vision of loveliness that floats in stark contrast to the horror and evil before it, but that is all. Soon, Costigan wakes from the dream back to his miserable life as an addict. It's revealed in a quick series of flashbacks that Costigan has succumbed to the lure of hashish through the intervention of a mysterious beauty who "lures" him into the Yun Shatu's opium den. A benefactor sees to it that he's supplied with all the hashish he wants. Costigan knows that he should be concerned about this. Nothing is free and there is surely a cost that must be paid for his addiction. Sure enough, it's revealed to him that he's been selected to act as the dark agent for Kathulos. Kathulos speaks to Costigan through a screen that hides his features. His servants bring Costigan to him and provide him with an elixir that staves the maddening hunger for the drug that has imprisoned him. Also, there is the beautiful Zuleika to keep Costigan occupied:

"I am Zuleika--that is all I know. I am Circassian by blood and birth; when I was very little I was captured in a Turkish raid and raised in a Stamboul harem; while I was yet too young to marry, my master gave me as a prisoner to--to Him."

"And who is he, this skull-faced man?"

Costigan soon learns that his duty to his new master is that of assassin. He is sent out on his first assignment to kill Sir Haldred Frenton at his estate in London, disguised as a gorilla!

This is pulp, folks. And it's pulp in full glory! Turns out that Kathulos isn't just some evil doctor making mischief against polite society. He is a descendant of "the Old Ones" who thrived in Atlantis thousands of years before the continents were populated. His body was entombed in a coffin where it remained beneath the ocean for thousands of years, before it was released to float to the surface where it was discovered by a sailing vessel. My recap here doesn't do the tale justice. It's something better left for the fan of pulp to discover for themselves.

Fans of pulp adventure should have fun with this one. A word of warning however. It's pretty racist stuff considering the depiction of the villains and our heroes' attitudes to other cultures. It's a product of its time and that has to be recognized going in to it.

Blow Up, directed by Michelangelo Antonioni, is one of those ultra cool movies that I love. It's been a number of years since I've seen it, but it's one of those few movies that'll have scenes replay in my mind from time to time, like celluloid ghosts pulled from hiding by the most random of moments in one's daily life. I wouldn't pretend to know what it's about and what it means, so forget about any deep analysis from me here. Just one fan's admiration is all you're going to get here. That and a recommendation to seek it out and see for yourself it if you haven't already done so. 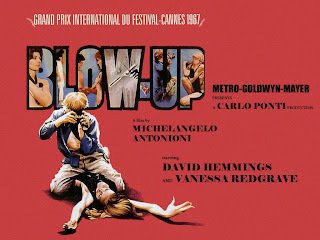 Released in 1966, Blow Up is a snapshot of a swinging, mod London; a time and place I would have loved to experience for myself. It's an "art film" whose story is deceptively simple. A photographer, played with laconic cool by David Hemmings, takes pictures of what appears to be a pair of lovers in a park. The woman involved discovers him doing so and is none to happy about it. She wants the film and the pictures. Later, while developing the photographs, he notices something odd about them. Within the frames, it seems the film has captured a body, and a murderer. The lovers' embrace is ambiguous, open to seeing it as either passionate or sinister. The more Hemmings tries to blow up the photographs, the less we can distinguish what is contained in them. That evening, after a lively romp with two birds, he goes back to the park alone and discovers a body there. When he returns to his studio he find's that it's been broken into and ransacked of his prints and negatives (echoes of the legendary "men in black"). By now, the viewer is hooked, and this is where the film really kicks. 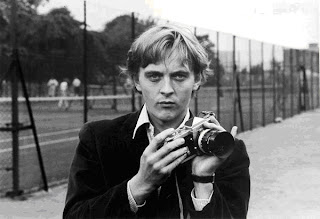 To give any more away would take the fun away from the uninitiated who've yet to experience it for themselves. One may find it either invigorating, or frustrating. Perhaps both. That's what's fun about films like this. One scene I'd like to share however, is the famous one below where we're treated to a nightclub performance by The Yardbirds, featuring a young Jeff Beck and a pre-Led Zeppelin Jimmy Page. The audience's reaction to what's happening onstage is priceless.

I've also seen Antonoini's  L'Avventura and love it as well. Perhaps I have an attraction for ennui and mysteries without solutions.

Email ThisBlogThis!Share to TwitterShare to FacebookShare to Pinterest
Labels: movies

I have to admit that the only reason I purchased The Alien by Raymond F. Jones was for this crazy cover. I especially like the “bachelor pad space age babes” depicted on it, with their cute glass bubble helmets and their skimpy outfits. All that’s missing on them is those torpedo bras that graced pulp babes back in the day. And dig their somewhat wary gazes at what is assumed to be The Alien, standing in naked majesty before them. And all the men are toting weapons ready to blast this cat into the cosmos, while the women linger there. Also, is it me, or doesn’t the Alien look astonishingly like Kevin Bacon?


I’d never heard of this “classic of Science Fiction” before, but Raymond F. Jones’s name seemed vaguely familiar. Turns out, he wrote This Island Earth, which was a pretty cool movie as I remember it. A quick look at his bibliography shows that he’s also written a fair amount of stories for the pulps in the 40s and 50s.

The Alien tells the story of a strange and massive crystalline “time capsule” discovered by archaeologists in the asteroid belt between Mars and Jupiter. It seems that the asteroid belt contains evidence of an inhabited planet destroyed many thousands of years ago. Through a serious of half-life dating technology it’s determined that this crystal and the other relics found among the asteroid belt date back to at least half a million years ago. Among the team of scientists studying these finds is Delmar Underwood, a man whose disillusionment with earth has prompted him to follow a life out among the dunes of space. His companions include a team of “semanticists”, capable of deciphering codes and languages of the pasts, chief among whom is a Dr. Dreyer. The discovery of the crystal is reminiscent of that famous plot device used in 2001, A Space Odyssey. Only the cool thing about this time capsule is that it houses the remains of . . . The Alien!

Our scientists discover that the crystal is engraved with a cryptic series of symbols and codes, invisible to the naked eye. Previously, all efforts to crack the meaning of these hieroglyphics had proven futile. What's needed is some kind of galactic Rosetta Stone to provide the key. Luckily for our gang, a mathematical key is found on the time capsule, and soon enough Dreyer and Underwood are able to decode the meanings of the symbols, leading to a method for opening the capsule and unlocking its contents.

It’s like the discovery of an ancient Egyptian tomb, untouched for centuries and is all pretty exciting. Only instead of a preserved mummy we have a preserved alien being that lived 500,000 years in the past. And best of all, our archaeologists discover the key to resurrecting this self proclaimed, godlike being.

Should they do it? Well, what do you think, man? How else are we going to get this crazy scene depicted on the cover?

I thought the novel was a pretty cool ride. It’s got plenty tension throughout. It has a love angle to it, political conspiracy, warring factions, philosophical angst, a galactic confrontation, a trip to another planet, a space chase, and a final showdown between good and evil. There is the usual wonky science that you’ll get with books of this type, but I can forgive it considering the time it was first published (1951). So yeah, I would recommend it to fans of pulpy science fiction.
Posted by Kurt at 4:24 PM No comments:

"Trouble" by Sean Bonniwell, performed by The Music Machine. More well known for their hit "Talk Talk" this is the second song off The Music Machine's first album in 1966. It's also my favorite of theirs - at least of the songs on this record. Unfortunately the album is loaded with cover songs that the label insisted go on the record in lieu of their own material. "Kids want to hear songs they know!" I would have preferred a disc of all original material, which would have been all written by Sean Bonniwell. This song has a nice ratty guitar lick through it that I love. Also a nasty bass in the break.

In their early gigs they performed one song after another without breaks for talking and bullshitting around. They embodied their name literally as a Music Machine, night after night. Their look was simple. They all wore black, all had black hair, and each wore one black glove. The glove always make me think of that Spinal Tap title, "Smell the Glove."