I caught her day-drinking at the Doghouse, and when she came to the phone, she was mumbling drunk. "Winter, winter," she kept blubbering. "I can't stand another goddamned winter alone, Ralph." Ralph was an ex-husband twice removed. When she finally understood who I was and what I wanted, she lurched out of tears and into cursing. "Why don't you want to know where I live, bastard, why?" Then she hung up. By the time I drove out to the Doghouse, she had left. I called some more bars without luck. Lady bartenders live a tougher life than anybody knows.

Once again we're in the confused, rambling, wired-out-the-ass world of James Crumley as his weary hero Milo Milodragovitch meanders through a complicated maze of missing persons, surveillance, drug smuggling, guns, hand grenades, and environmental sabotage. And lots of schnapps and cocaine.

Again, my copy of the book has blurbs comparing James Crumley to Raymond Chandler and Dashiell Hammett. I can only say to forget those comparisons. They're not even close. Crumley's novels are wholly original takes on the myth of a private detective slaying dragons and righting wrongs. Comparisons to Hunter S. Thompson are far more appropriate. Crumley's heroes, Milo and Sughrue, are submerged in chaos and substance abuse and plots that make no sense to them, and barely any to the reader. Someone gets drunk, shot, beat up or screwed by a tough woman on just about every page. And throughout are observations on war, love and death that propel our heroes to inevitable disappointment and grudging justice. Dancing Bear is no different then any other of the novels by James Crumley that I've read. A rehash of the plot would be meaningless in attempting to entice a reader to enter Crumley's world. There is no linear path of discovery and justice that private eyes like Lew Archer and Philip Marlowe follow. No sun-burnt streets lined with palm trees and emerald lawns to wax cynical about. No glittering mobsters and sloe-eyed vixens to exchange deceit with. Instead you have an extremely flawed and marginally honorable hero barely managing to hang on to his own sanity while consuming massive quantities of drugs and alcohol in pursuit of a case that has no real beginning or end. Side trips and diversions, often to a dive bar or motel, are the norm. Romance with myth and heartbreak with reality at at constant odds.

This is the 5th novel I've read by James Crumley, and I can only tell you that I'm sorry there aren't more. I have a couple to go yet, not counting a collection of his short stories called Whores (which I imagine will be almost impossible to find) and I'm torn between holding off reading them, or diving right in to them now.

If you've not read one of his novels yet, then perhaps you should. Take one with you when you escape to Mexico after shooting someone who burned down your house.
Posted by Kurt at 9:49 AM No comments:

But each time she caught the desperate defeatism with a tight-lipped resistance. The House of Isher could not afford to destroy such a secret. Some day, it might play a vital part in preserving the Imperial House from resurgent enemies. She smiled at the intensity of her indecision. And there was no doubt in her mind that so long as the ship remained in existence the hours would seem long, and the Crown would be in mortal danger.


So yeah, I have both this book and its companion "novel" The Weapon Shops of Isher, which is supposed to come before this one but was built from stories published after the original serial publication of "The Weapon Makers" from February to April, 1943 in Astounding Science Fiction. If you think that's confusing, just wait.

I was supposed to read The Weapon Shops of Isher first, then this one. That's because it was published in novel form in 1952, a year after the other novel. It was again republished as One Against Eternity as part of an Ace Double. But really, I don't think it matters which one should be read first because, like most of the A.E. van Vogt stories and novels I've read, The Weapon Makers doesn't make a whole hell of a lot of sense by the time you're done.

Not to say that's a bad thing. This novel is such a Snap-Crackle-Whiz-Bang-Pulp of a Science Fiction adventure that plot and logic goes out the window in all the shit that's going on.

This one is about Captain Robert Hedrock and the struggle between the House of Isher and the Weapon Shops. The current Empress is the beautiful Innelda Isher who, at the start of the novel has just ordered the capture and death sentence of Hedrock for being a spy. Hedrock gets advance notice of this order and manages to escape Innelda Isher's soldiers from a banquet hall,  seeking sanctuary at the The Weapon Shops headquarters. Much to Hedrock's consternation, the Weapon Makers have issued their own death sentence on Hedrock, because they believe he is a spy for the House of Isher. You see, there's been a several thousand year long uneasy balance between the House of Isher and the Weapon Shops, which were designed to build and store weapons that could only be used in self defense against a tyrannical government. These Weapon Shops came about after the destruction of around a billion people in a war that just about destroyed the Earth and around the same time House of Isher rose to power from the nuclear ashes.

So anyway, Hedrock manages to flee the Weapon Makers  and escape into an underground laboratory where he's promptly attacked by a giant rat! The giant rat is the by-product of experiments that Hedrock has been conducting for the past several hundred years in an attempt to understand and harness the radioactive chain of events that made him immortal thousands of years ago. That's right, Hedrock is immortal...just go with it. Anyway, Hedrock is now on the hunt for a cat named Derd Kershaw, who has apparently come up with a design for an interstellar rocket ship that both the Weapon Shops and the House of Isher are determined to get their hands on. Apparently having this method of space travel at one's control insures superiority over one's enemies. Don't ask me why.

Hedrock's seach for Derk Kershaw leads him to twin brothers Gil and Dan Neeland. It turns out that Gil is looking for his brother Dan, who was involved in the rocket design that Derd Kershaw was overseeing. Through a confusing series of events Hedrock gets a job as a rocket designer for a suspicious dude named Greer, but when Hedrock reports to Greer he discovers that the building they're working in is really a hangar hiding the Kershaw's rocket ship! I'm throwing the exclamation point in because that's how things move in this novel.


So Hedrock dupes Greer long enough to tie him up, providing the opportunity to investigate the ability of the ship they're in. But, Greer has been in communication with security commanders from the House of Isher and they've now surrounded the hidden rocket ship with 800 cannons, or something, forcing Hedrock to assume Neeland's identity, after which he manages equip part of the ship with an interstellar drive and make his escape by blasting off into space, where he travels at many times the speed of light, ending up on a planet where he's captured by a species of giant spider-like aliens so advanced that they're capable of fusing identities through telepathy, allowing Hedrock to return to Earth under Neeland's identity!

Back on Earth, Hedrock makes a giant man which then attacks the cities of the Empire, forcing the House of Isher and the Weapon Shops to form an alliance against the destruction of their cities.

At least I think that's what happens.

I'm telling you this novel shifts gears so many times that I was never really sure what was going on by halfway through it. The whole story moves like a dream, where shit just happens without any seeming design or logic. Somewhere in his career, A.E. van Vogt determined that in order to hold a reader's attention he'd have to keep the action fast and furious, and logic be damned. Much of this was a result of his novels being structured, or cobbled together, by previously published short stories from the pulps. At least this is true of his novels from the 50s. It was also during the 50s that A.E. van Vogt was involved in L.Ron Hubbard's Dianetics centers in California. So make of that what you will.

Most of A.E. van Vogt's novels are easily found in used bookstores for really cheap. It seems they were never out of print, finding new readers every generation. It's understandable because, in spite of their flaws, they're pretty fun to read. They're the stuff that inspired many more "sophisticated" novels that came after in Science Fiction. So take 'em for what they are. 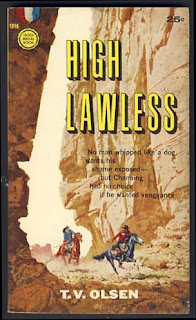