He watched as she unbuttoned the flaring throat of the dress with nimble fingers, worked the zipper over her hip, then yanked the dress up over her legs. In a moment she stood before him in a black bra, black panties that were skin tight, a white garter belt, and the pink-hued nylons high on her smooth, firm, swollen thighs. "Like?" she asked softly. 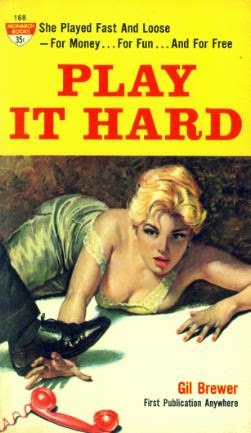 Um...yeah. Me like! And there is plenty scenes like this in the pages of this neat little thriller from Gil Brewer!

Play It Hard is a perfect example of why Gil Brewer is one of my top favorite writers of mid-century noir. Books like this one move at a such a fevered pace that there is no time to slow down and realize just how far-fetched the plot is. That doesn't matter. The only thing that counts is getting to the last page and finding out who's going to end up living, dead, or trapped in some kind of existential-psycho-noir nightmare from which there is no escape.

Steve Nolan, our hero, wakes up from the depths of an alcoholic fugue to discover that the woman he just married is an impostor. She's now someone else, someone who says she's Jan Nolan, his new bride of one week, the same girl he met only two weeks before on an isolated beach on the west coast of Florida. But Steve knows she's not the same Janice Ellen Mary Lunsford that he married. She's a liar, an impostor. Problem is, no one believes him. No one claims to have seen the real Jan Nolan. It seems that Steve is suffering from a bout of amnesia brought on by a nervous breakdown of some kind. His doctor, Earl Paige, doesn't believe him. His Aunt Eda doesn't believe him, and neither does his pal, Detective Bill Rhodes. They tell him to get some rest, lay off the booze and go home to his new bride Jan Nolan. Is Steve crazy? Is he the victim of some kind of plot? And what happened to the real Janice Nolan?

Steve spends a large portion of the novel trying to retrace his steps that led up to the blackout resulting in having a stranger replacing his new bride. There are snatches of memory: a hideaway motel on the beach, a man with thick eyebrows sharing a booze-filled night, a motel manager who claims not to have seen the real Jan Nolan. There is also Steve's best gal, Claire Borroughs, the sweet girl next door who Steve dropped for a two-week engagement and marriage to a woman with no history.

And then, a body turns up. The body of a young woman tortured, raped and beaten to death. A young woman who exactly matches the description of the real Jan Nolan. Just what happened in this breakdown induced fugue-state of Steve's? Now Bill Rhodes and the other homicide detectives want to know. And who is this devil-eyed vixen in Steve's bedroom?

Giving away anymore of the plot would take the fun out of reading it for yourself. This is exactly the kind of book that polluted my young impressionable mind when I was a teenager. The sort of book that convinced you there were only two kinds of dames out there, Good ones and Bad ones. The sort of novel that writers like Brewer excelled at.