From the time I left school I wanted to find something, but I didn't yet know what that something was going to be. It was just something I was looking for in a vague, unsatisfied sort of way. It was somewhere. Sooner or later I'd know all about it. It might perhaps be a girl. . . . I like girls, but no girl I had met so far had been important. . . . You liked them all right, but then you went on to the next one quite gladly. They were like the jobs I took. All right for a bit, and then you got fed up with them and you wanted to move on to the next one. I'd gone from one thing to another ever since I'd left school. 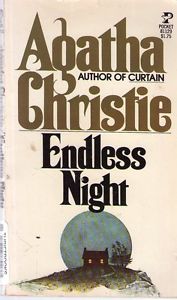 Yup, Agatha Christie knew, as does anyone else who has read enough crime fiction, that a restless and bored young man will soon find himself in deep kimchi. Especially where spooky dames are concerned!

I had a few days off work and was in the mood for a more relaxing kind of read, so I pulled a couple Agatha Christie novels off the shelf to dig into. I used to devour her novels back in Jr. High. I think I read all of the Poirot's by the time I was in 10th grade. Same thing with the Lew Archer novels. On the surface, no two private eyes could be more dissimilar than Archer and Poirot. But thinking about it now, both detectives dug into to the psychological torment of their cases instead of going around beating people up and shooting people. They were novels of dialog, questions and answers, delving into the past and unearthing secrets that lead to crimes of the present.

These two novels are stand-alones in the Christie catalog. Endless Night was published in 1968, the same year that Beggars Banquet was released by the Rolling Stones. Reading the novel, I tried to envision the narrator, Michael Rogers, in the time when "Sympathy for the Devil" might have been played in swinging London pads. And for the first part of the book I could. Rogers had the restless and dissatisfied voice of many noirish antiheroes of the 50's and early 60's. His laconic and somewhat cynical voice is music to the aficionado's ear. And you don't have to be a genius to know that, no matter how much he seems to confess to you, he's still hiding something in reserve. He thinks that perhaps he's found that something he'd been looking for when discovering the crumbling estate The Towers on Gypsy's Acre. A place abandoned and rumored to be cursed. It's even got a local gypsy woman named Mrs. Lee who promises to tell our hero his fortune if he crosses her palm with silver. Naturally she sees evil forebodings in Michael Rogers's future and warns him off Gypsy's Acre.

One day, while exploring Gypsy's Acre after a public auction, he meets Ellie Guteman. Ellie is one of those dreamy, somewhat haunted goth-girl types that walk in mystery. She and Rogers strike up a conversation over the uneasy beauty of Gypsy's Acre and soon they fall in love. Rogers learns that Ellie is an American heiress, sheltered by an army of advocates, lawyers and shifty relatives. Upon her twenty-first birthday, Ellie will have a fortune at her control. For the first time, Rogers tells us that he's found love and purpose. Ellie surprises him by purchasing The Towers, and the two of them hire an architect to rebuild the crumbling estate and live "happily ever-after."

Here is where the novel shifts gears from Gold Medal territory to Gothic Romance. The young lovers live on Gypsy's Acre in the midst of ancient curses, meddling relatives and ominous warnings to leave before unspeakable evil consumes them. Ellie injures her ankle in a fall and Greta, her childhood au pair and companion moves in with them to help run the staff. Greta is described as a Valkyrie by Rogers, who takes an immediate distrust to her. Her beauty and power are undeniable, but he resents the hold she seems to have over his new bride Ellie. It's almost all very Dark Shadows, with simmering emotions stewing in ancient curses, figures in the woods and modern threats left on dead birds. But it's a slow burning stew, with not a single murder occurring until well past two-thirds of the novel. 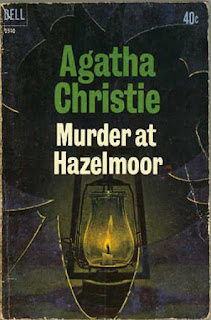 For the second Christie novel, I read Murder at Hazelmoor. This one is another stand-alone mystery published way back in 1931, but could have easily featured either Poirot or Miss Marple as the detective. Instead, we have a plucky young woman named Emily Trefusis doing the sleuthing. Emily has a personal stake in the mystery at Hazelmoor because it's her fiancé, Jim Pearson, who's got his neck on the chopping block as the chief suspect in the murder of old Captain Trevelyan. The murder has taken place, as proper old British murders should, during a dark winter storm. As an added bonus, the murder occurs during a séance in which our main suspects are six miles removed from the dastardly scene of the crime. The séance in this case is a game of "table turning" in which spirits tap their messages out through a series of knocks on a table. Think of a Ouija board only without a board and planchette. It's during the table turning that the spirits warn our amateur occultists that Trevelyan is being murdered. The game then breaks up immediately as its participants believe one of them is displaying remarkable bad taste. Ahh...but wouldn't you know, the spirits never lie.

Murder at Hazelmoor is the only Christie novel in which I actually solved the murder with the clues provided. I don't know if that makes me as smart as Emily Trefusis, or just lucky. And no, it wasn't just guesswork on my part. I fully expected to have been duped but the clues are there to point to the culprit. There are loads of red herrings and everyone has a reason for doing the old codger in, but only one of them done it.

Both novels are easily found in practically any used bookstore. Happy sleuthing!