I thought it appropriate to blow out 2016's posts with a psycho-noir masterpiece, Savage Night by Jim Thompson. I picked up my Black Lizard edition of this novel about 30 years ago from a store long since closed. Like most of us, I discovered these noir classics through Black Lizard reprints. Same thing with Harry Whittington and Dan J. Marlowe. Several years later Black Lizard was picked up by Random House and the novels were re-issued in trade paperback at a price of $10 instead of $3.95, which kind of sucked for readers at the time. But that's how the publishing world goes.

Anyway, I thought it would be fun(?) dipping back into the paranoid psycho-sexual nightmare of crime and madness that Jim Thompson was so good at bringing to the page. This one, from 1953 follows a hitman named Charlie Bigger on assignment to rub out a potential mob witness, Jake Winroy, before Winroy can testify and bring a whole heap of trouble down on men of influential standing.

Bigger comes to the town of Peardale in disguise as a student attending a teacher's college. He's been hired to kill Winroy before his trial date. His orders are to make the hit look like an accident. Bigger's boss is a shadowy kingpin referred to only as The Man. Charlie Bigger cuts a strange figure as a hitman. At barely 5 feet tall, bad teeth and poor eyesight, he hardly presents an imposing figure of menace. Lifts in his shoes, contact lenses and dentures help somewhat. Years of being called Sonny, and treated like a boy by women have hardened Bigger into something of a time bomb. Our only background on Bigger's violent life is given to us through an article in a True Detective magazine, much like the kind Thompson himself used to write.

Bigger is no sooner in town and taking residence in Winroy's home as a student boarder when he's in deep with a couple of unsettling dames in Fay (Winroy's wife) and Ruthie, Ruthie is another student, hired by the Winroys to come in and clean up house a few hours each day. Ruthie has an unsettling deformity which Bigger finds both horrifying and appealing. He relates to Ruthie as a misfit. Fay is a hardened dame with a past as a nightclub singer, hooking up with Jake during his Cadillac days and now living a frustrated existence with a washed out drunk. Jake is a clown, given to fits of drunken panic. He believes, rightly, that Bigger's arrival in town means his number is finally up.

Also thrown into the cast is fellow boarder, Kendall, a kindly older gentleman who seems to take more than a passing interest in Bigger's success as a student. Then there is Sheriff Summers, who has his own suspicions about our hero.

All of this makes for a pressure cooker of mounting paranoia for Charlie Bigger as he tries to navigate his way between lust for Ruthie and overtures from Fay and the fawning attentions from Kendall. Alone that makes for a nice setup, but Thompson isn't interested in pure plot to drive a story. His books are all about voice and where that voice is coming from. His protagonists are seething with hangups that often betray them.

For example, at one point midway through the novel, Bigger interrupts his story to tell us about a bizarre encounter with a writer he once met while he was hitchhiking through Vermont. This writer had a load of manuscripts in his car that he equated with manure. The writer also lived on a farm where he kept goats that fertilized a field of vaginas. He tells Bigger that he used to grow breasts and asses and legs, but finally settled for vaginas because there was no demand for the other stuff.

Throughout the novel the characters speak in broken patterns, as though having to constantly interrupt themselves before spilling their true intentions. It's something that becomes more and more apparent as the novel progresses, with Bigger often telling the reader that he feels as though he's disappearing. Disintegrating seems more like it. Ruthie stutters as she speaks, Bigger and Fay halt their words before they're half spoken, and by the end of the novel we have Bigger and Ruthie communicating only through grunts and gestures.

A whole lotta of weird for what's supposed to be a dime caper.

I'm sure a lot of study has gone into Thompson's novels, but one has to remember that Thompson wrote these with the necessity of making a living, not provoking college professors. There wasn't time to polish and rewrite. These are first draft fits of anger and humor, never forget the savage humor,  that make reading these novels so compelling. Thompson had enough bitter experience at life and work to dish it back plenty at the casual reader who happened upon one of his books at the drugstore rack. I like to picture him laughing to himself as he typed out scenes featuring a field of vaginas, or a guy hiding out in a barrel of mincemeat, or a protagonist laying it to a woman with a deformed leg. That's the fun I get out of these books.

Most noir fans have already read this novel. Many more have read his more famous The Killer Inside Me. There is nothing out there like them, and it's too bad that their popularity didn't come at a time when Thompson could have personally got the benefit of it. 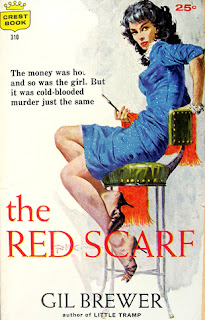 Her face seemed to laugh at me. A curious laugh. A bewildering laugh. There was a sparkling dance to her eyes she kept half veiled and her mouth parted just a little bit. He tongue touched the tip of her teeth, withdrew and she said, "Now is the time for something else, Joe. Now is for a woman going back a long time who sees somebody she could have loved then."

I looked at her and held my breath. She was so completely beautiful and I didn't want to make a fool of myself. Not yet.

I don't have the original issued of MANHUNT that this short novel by Mickey Spillane first appeared in. I wish I did though. Just about every story I've read that was originally printed in MANHUNT I've enjoyed. Sadly, I was born too late. I wish that someone would maybe anthologize stories from MANHUNT in single collections, the way they do WEIRD TALES, or ALFRED HITCHCOCK'S MYSTERY MAGAZINE. Maybe one day. Or even better, make the original issues available on Kindle.

I got the opportunity to read this story in PULP MASTERS, edited by Ed Gorman and Marting H. Greenberg. If you find this collection I recommend picking it up. It's got short novels by John D. MacDonald, James M. Cain, Lawrence Block, Donald E. Westlake and Harry Whittington that originally appeared in Men's magazines or digests. All very good and entertaining stories.

I wouldn't rank "Everybody's Watching Me" by Mickey Spillane as one of my favorites. There is plenty of action and bad guys and a hot dame named Helen Troy in it, but there were long passages of dialog that through me a bit, and some pages of filler. Also, I think Spillane was hemmed in a bit by trying to tell the story of a gang war strictly from Joe Boyle's perspective. Often to the point of having the plot progress via awkward scenes of Joe eavesdropping on talky bad guys.

As a simple tale of revenge it's a good one, though. Joe Boyle delivers a note to chief badguy Mike Renzo, telling him that he's gonna find his guts all over the floor for killing a gambler named Cooley. The note is signed by someone named Vetter. Vetter is a shadowy assassin for hire who's been icing various mobsters in different cities. No one knows who Vetter is or what he looks like. Renzo decides to have our hero Joe Boyle followed so that he could finger the mysterious Vetter. Along the way Joy Boyle hooks up with Helen Troy, a chanteuse of sorts for Renzo's nightclub. He also gets tangled up with the cops who would also like to get their mitts on Vetter, preferably after he puts Renzo on ice. Two birds with one stone, kind of thing.

Lots of beatings and shootings ensue, which make it vintage Spillane. Boyle and Helen also get torqued up for each other at various times in the story, until the finale when the shit all hits the fan and the bad guys scream like dames. The surprise ending isn't really a surprise if you've read enough Mickey Spillane, but it's still fun getting there. This would have made a pretty cool late night noir movie from the 50's.