Some of my Pulps and Bad Photography

I'm a bit of a caveman when it comes to technology. And what I look for in entertainment as well. Here are some of the few pulp magazines I've picked up over the years. I'm not a pulp collector by any stretch. I had a few back when I was in high school in the late 70's that I picked up from the flea market. Those got lost in the years since. Probably thrown out by my grandmother when I'd left for the Air Force. Same as my old comic books from back then. Anyway, here are a few: 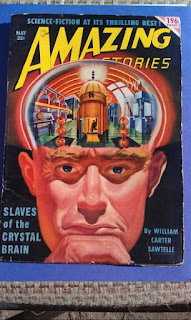 This has a great cover for the lead story, "Slaves of the Crystal Brain" for the May 1950 issue of Amazing Stories. One of these days I'll get around to reading it. 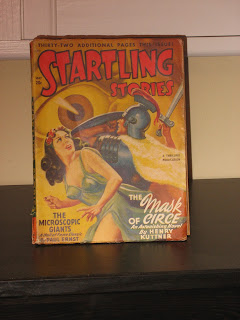 This not very good photo is May 1949 issue of Startling Stories featuring "The Mask of Circe" by Henry Kuttner. I believe this was co-written with his wife C. L. Moore, however she is not credited in the magazine. I know it was reprinted in paperback several years later. 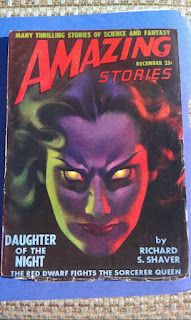 I'll be posting some of my other pulp mags in the coming weeks/months.