I was in 9th grade when I found this book at the Town 'n County branch public library. I'd read a few "Science Fiction" stories by Ray Bradbury (more on him in a future post) and had seen every Star Trek episode numerous times on Channel 44. Same for The Twilight Zone and (even rarer) reruns of The Outer Limits. But nothing before it had kicked of my love for pulp Sci-Fi like this book did. 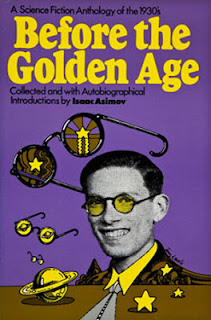 Pulling it from the library shelf, I had no idea what the Golden Age of the title even meant. All I knew was that, from the dreadful present of the 1970's, the 1930's was a hell of a long time ago. I looked at the table of contents and saw stories like "The World of the Red Sun" and "Parasite Planet" and the irrestible "The Brain Stealers of Mars" and knew right away I was going home with it.

I can remember reading the first story "The Man Who Evolved" by Edmund Hamilton (April 1931 - Wonder Stories) and how it bowled me over. Nothing in my reading experience had equaled the suspense and wonder that Hamilton's story evoked. In it, Dr. John Pollard, discovers that a concentrated dose of "cosmic rays" with their "harmful properties" filtered out can speed up the process of evolution from thousands of years to mere minutes. And what better subject to test his process on, in the true spirit of mad science, than himself, with his assistant documenting the process. Of course, things start out great and soon turn nightmarish. I'd never heard of Edmund Hamilton before, but knew that I had a new author to look for.

The book is loaded with adventure, wonder, evil, terror and triumph, all delivered in full color pulp glory. I didn't have the original covers to look at, but I had a hell of a show playing in the "theater of my mind" to borrow a phrase from Flaubert.

Other stories included are: "The Jameson Satellite" by Neil R. Jones, "Submicroscopic" by Capt. S.P. Meek (I wondered why "Captain" then and still do now), "Awlo of Ulm" by our same Captain Meek, "Tetrahedra of Space" by Schuyler Miller, "The World of the Red Sun" by Clifford D. Simak, "Tumithak of the Corridors" and its sequel "Tumithak of Shawm" by Charles R. Tanner, "The Moon Era" by Jack Williamson, "The Man Who Awoke" by Laurence Manning, "Colossus" by Donald Wandrei, "Sideways in Time" by Murray Leinster, "Old Faithful" by Raym,ond Z. Gallum, "The Parasite Planet" by Stanley G. Weinbaum, "Proxima Centauri" by Murray Leinster, "The Accursed Galaxy" by Edmund Hamilton, "He Who Shrank" by Henry Hasse, "The Human Pets of Mars" by Leslie Frances Stone, "The Brain Stealers of Mars" by John W. Campbell, Jr., "Devolution" by Edmund Hamilton (three for this guy!) and "Big Game" by Isaac Asimov, "Other Eyes Watching" by Campbell again, "Minus Planet" by John D. Clark, "Past, Present and Future" by John D. Clark, and "The Men in the Mirror" by Ross Rocklynne.  Whewww....

The book was printed in paperback in 1975 but in three separate volumes to handle the length. I suppose they could have crammed the whole thing into one single paperback and had the length of your average Michener novel, but...

Anyway, it's a motherload of pulp action, romance and wonder delivered when stories were fun by wordsmiths who wrote their hearts out for our entertainment.