My first exposure to Santo was when I was stationed in California back in the early 80's. I'd catch a few minutes of these movies on the independent stations from L.A. and was immediately intrigued. I'd grown up in Florida and was all too familiar with professional wrestling, masked and otherwise, and of course ate up anything that had to do with horror movies. But combining the two - pure genius!

Santo was Rodolfo Guzman Huerta and his wrestling career ran from the 1930's clear in to the 1980's. He starred in more than 50 lucha libre movies, of which I've only seen 4 in their entirety, including the one above, Santo en la venganza de la momia. I've got a long list to catch up on. Clearly Santo is the hero of the films, battling everything from vampire women, monsters, martians, pirates, evil scientists, gangsters and heels. You name it, he'll take them on in the name of justice. His movie adventures began in 1958 with Santo contra el cerebro del mal and continued until his last movie, Santo en la furia de los karatekas in 1982. Some years back I picked up some of his DVDs that had been subtitled in English. I imagine it wouldn't be too hard to find his movies on DVD should you want to.

In spite of Rodolfo Guzman Huerta's passing in 1984, Santo lives on in songs, cartoons, comic books, action figures and movies. Hopefully his legend will continue for a long time to come. 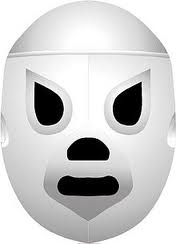