Lawrence Block - The Naked and the Deadly

So far I've enjoyed everything I've read by Lawrence Block, so when I saw his collection One Night Stands and Lost Weekends at the bookstore several years ago there was no hesitation on my part for slapping my money down. I've always been a big fan of mid-century crime fiction, but had yet to read Block's short stories from that period. Stories that originally appeared in magazines like Manhunt. Manhunt is one of those magazines that had to have been a real treat for crime fiction fans. I never seem to find old copies of it in the used stores, the way one can with Ellery Queen Mystery Magazine, or Alfred Hitchcock Mystery Magazine. I've got only one issue of Manhunt in my possession, and I found it in a library book sale of all places.

"The Naked and the Deadly" is a novelette featuring private eye Ed London. The case is one of those where the gorgeous doll walks into the P.I.'s office (in this case, Ed London's apartment) and offers him a job that seems way too sketchy for a wise man to get caught up in. In this case, London is hired to pay off a blackmailer whose been putting the screws to our mysterious babe, Rhona Blake. Ms. Blake insists that one payoff to the blackmailer will be sufficient. To sweeten the deal, she pays London two grand, and a roll in the hay. It must be stories like this that had all kinds of book geeks signing up for criminology correspondence courses back in the day. London is a smooth operator. He drinks cognac and smokes a pipe. He can also smell bullshit, even when it's handed to him smothered in expensive perfume. He takes the job, shows up at the agreed upon payoff joint, and takes a ride with the blackmailer into a shootout. Barely escaping with his life, London returns home to his apartment, with the payoff loot, his retainer, and a whole lot of questions for his client, Ms. Rhona Blake. The next morning, London gets a visit from a sleazy lawyer offering him 10 grand to find a client's wayward daughter. The lawyer shows London a picture of the daughter, Rhona Blake, as if you didn't already know that was coming. When London refuses to take the job, the lawyer leaves him with one of those thinly veiled threats that suggests more trouble for London.

"The Naked and the Deadly" first appeared in the October 1962 issue of Man's Magazine. I liked reading it, even though I sort of knew where it was going, having read tons of crime stories with sketchy babes who fall way too easily into the detectives's beds. But that doesn't make these stories any less fun. 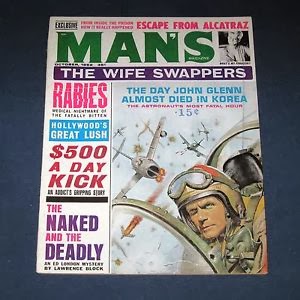 I was able find a picture of the the October '62 issue of Man's Magazine online. It's got a cool cover depicting John Glenn as a fighter pilot. Also it features a story about wife swapping. Hmmm...I didn't think that really took off until the 70's, but what the hell do I know anyway. It's kind of sad, knowing that I can't swing down to the nearest drugstore and find magazines like this anymore on the racks.

This issue Amazing Stories contains the short novel "Slaves of the Crystal Brain", by William Carter Sawtelle. I'm pretty certain that Sawtelle is a pseudonym, but don't ask me why. In addition, there are 8 other stories giving a whole lot of bang for your quarter back in 1950.

This is just the sort of cover that would have hooked me had I been perusing the news-stands in 1950. That and the title, "Slaves of the Crystal Brain" which is a grabber. The story is a decent one that moves at a fairly rapid clip, about a demonic crystal brain hidden under the streets of Chicago in the year 1972. It controls a horde of slaves, in fact normal citizens who've been kidnapped and given "treatment" that saps their identity. Agent Joe January of Federal Security Bureau uncovers the plot of the Crystal Brain during one of his routine security checks on scientist William Atkinson. Seems a couple of renowned scientists have disappeared without a trace, resulting in the security checks of all remaining scientists of note. While visiting Dr. Atkinson's lab, January is told by Atkinson that he knows what's behind the odd disappearances of other scientists. Before he can divulge much further, a black orb appears in the lab and descends upon the unfortunate Dr. Atkinson, erasing him from existence. This black orb is impervious to bullets and any other weapon that January can hurl at it. Also, it seems to have the uncanny ability to eavesdrop on January's intentions. Meanwhile across the city, plucky (well she's described as "wren like" and wearing a dress that needs no extra padding!) Nancy Howard is eavesdropping on her boss, Mr. Lorton, as he converses with someone, or something, behind his fortress-like office on the top floor of his skyscraper. Lorton is one of those almighty bigshots who manages to control most of the city through his wealth and influence. Nancy Howard is convinced that Lorton is behind the disappearance of her brother, one of the missing scientists. Too bad for her, she's right. Lorton discovers her spying on him, and sends her to the Crystal Brain for treatment. You can bet that January and Lorton's paths will cross, in addition to lots of black orbs doing their nasty business at the control of the Crystal Brain. And you can bet that January and Nancy Howard will meet, and when they do, sparks will fly!

This is one of those stories that has way more escapism than any science in it. It's non-stop action, with plenty of cliffhanger chapters to keep the reader hooked. Also, there is just a touch of blood and gore, in addition to titillation, to place the whole thing firmly in the pulp camp.

This issue of Amazing Stories was edited by Howard Browne, which leads me to believe that Sawtelle (whoever he is) was also behind a couple other stories in the magazine. Robert Bloch turns up here for a pithy short story "Tooth or Consequences" about a vampire taking a trip to the dentist. "If This be Utopia" by Kris Neville is one of those claustrophobic stories of a society run amok with security for the health and safety of its citizens.

All in all, some fun stuff, old school style.

"I have a contagious fungus," I said. "Sort of vaginitus of the hands."

Having gotten my Christmas duties done for the holidays, I found I had the whole day yesterday to do nothing but read another trashy bestseller from the typewriter of Harold Robbins. Dreams Die First, was the third book I started in the past week, and the first one finished. I don't know if that says more about my reading skills, my tastes, or just my state of mind for the holiday season, that I was able to knock this 408 page novel down in less than two days.

What I can say is that this is one of the more off the wall "bestsellers" that I've had the joy of reading. I've never read a mainstream commercial work of fiction before that has as many uses of the C-word in it for describing the anatomy of a woman's body. That and a plot that falls down all over itself with randomness and silliness; more so than the previous novels Harold Robbins novels I've read. Once again, this book must have had a place in a lot of bookshelves in the late 70's if the sales figures for Robbins's novels are to be believed. My question is, who exactly was reading them? Men, women, or horny teenagers?

The plot concerns an ex-Green Beret who decides, through the "help" of his shady uncle, to get into the publishing business. We meet our hero, Gareth Brendan, as he wakes up in his apartment next to a naked young man, with no memory of the night before. Gareth is unemployed and out of prospects. He tells us he's a Vietnam veteran who was forced to pull an extra year in the military to keep from bad mouthing the war, or something like that. Gareth's bio is sort of made up along the way, as if Robbins wasn't exactly sure himself. Gareth gets a ride from his loan-shark, referred to as "the Collector" to the unemployment office where he flirts with pretty clerk named Verita. Outside, Gareth gives his last unemployment check to The Collector, and is offered the possibility of a job by the Collector's boss, Lonergan. With no other means of support forthcoming, Gareth agrees to meet Lonergan personally after midnight that night. Until midnight, he'll spend the evening in Verita's bed giving her multiple orgasms.

All the characters display the compulsion and self control of your average teenager, only with lots of money and  freedom with which to pursue their whims. Everyone falls in love instantly and has explosive orgasms throughout.

Now that I think about it, maybe all those readers back in the 70's were teenagers between Stephen King novels...who knows. As for me, will I read anymore Harold Robbins? Yeah, you can probably bet on it.