One of the things every horror movie fan knows is you have to wade through a lot of shit to find gold. Messiah of Evil from 1973 is one such find. To describe the movie would take the fun out of seeing it for yourself, if you haven’t seen it already. I’ll say that it’s a psychotic, random, dreamlike, psychedelic, cannibal, zombie, vampire, swinger movie and let it go at that. All the right ingredients for a classic, right?


Marianna Hill plays Arletty Long, who comes to Point Dune to visit her father Joseph Long, a reclusive artist. She arrives in the night to a Mobil gas station, where the attendant tells her that no one wants to go to Point Dune. An antique pickup arrives and a gaunt, creepy Albino looking dude who tells the attendant that he wants “Two dollars, no knock!” The attendant then sees in the bed of the truck a couple of corpses, one with its eyes ripped out. Just another night in Point Dune, and just the type of weird scene to kickstart the craziness. But that’s nothing compared to the stuff in store for Arletty.


In town, Arletty looks for her father who is missing from his spooky house on the coast. The only clues he’s left behind are his scattered artwork and a chaotic diary, evidence of a disturbed mind. Arletty is meets the local art dealer who happens to be blind. Maybe that’s a shot at art critics, who knows…anyway, the dealer’s assistant tells Arletty that some others have been asking about her father, and they’re staying at the Seven Seas Motel. Arletty goes to the motel and finds Thom, played by Michael Greer, an aristocratic “collector” and his two travelling companions Laura and Toni, played by Anitra Ford and Joy Bang, respectively. Anitra Ford may look familiar to fans of The Price is Right as she appeared on the game show for several years early on. She’s a beautiful woman and would have been seen often on TV in the 70s in a number of shows. Toni is one of those bored seventies girls that you would have seen by the score in lower rung girlie magazines like Cheri back in the day, if that was your sort of thing. Entertaining Thom and his companions is the local town kook, played by Elisha Cook Jr. He blithers on about a blood moon and the town’s citizens turning into animals, before being sent on his way by the gang.


Later, Thom and his girls take residence at Joseph Long’s house with Arletty. The opportunity for some groovy sex scenes with Arletty, Thom and the girls is squandered here, in lieu of more creepy randomness. Laura gets bored with the scene and leaves one night for San Francisco. She gets a ride into town by the creepy Albino character in his antique pickup, where he tries to impress her by consuming a live beach rat. Needless to say, Laura would rather bail at the next stop sign than ride any further with him. And this is where the movie turns from cheapy drive-in horror to cool, effective dreamlike horror. Laura wanders through a ghost town of brightly lit storefront windows until following a lone pedestrian into an empty Ralphs Supermarket. What Laura discovers in the supermarket is justifiably a famous horror movie moment and my describing it wouldn’t do it justice.


I believe the film is easily available for viewing, and I would recommend it to anyone who appreciates old horror flicks from the 70s and 80s that don’t follow the paint-by-numbers plot of your standard horror fare. I think you’ll dig it. 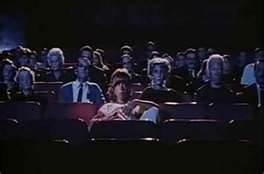