One of my favorite movies is the mostly forgotten neo-noir classic (in my own  humble opinion) The Hot Spot, released in 1990 and starring Don Johnson, Jennifer Connelly and Virginia Madsen, and directed by Dennis Hopper. 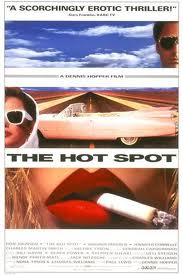 Hopper created the cinematic equivalent of a classic Gold Medal paperback novel, using Hell Hath No Fury by Charles Williams as its basis.  The movie barely strays from the book at all and that’s to its credit. It didn’t have to be a loud shoot-out, blood, guts and profanity spattered mess that is so often the case when filmmakers attempt their version of noir. It’s slow, languid, stylish and nearly perfect, remaining true to its source with lots of smoking, lots of laconic gestures and lots and lots o’ seething lust.

Johnson plays Harry Madox, a loner who cruises into a small Texas town in the heat of a summer afternoon. From his classic Studebaker he sees the gorgeous Gloria Harper, played by a Jennifer Connelly, walking to work, and he decides to stay. Madox immediately lands a job at the local used car lot where Gloria does the bookkeeping. It’s only a matter of a day before Madox has come to the attention of the car lots owner’s wife, played by a stunning Virginia Madsen. Dolly stalks Madox like a perennial bitch in heat, dropping lines on our hero like, “There’s only two things to do in this town, and one of them is watching TV. Unfortunately my TV is broke.” Needless to say, in no time flat Dolly has her claws in Madox’s skin. Meanwhile, Madox is developing a slow burn for the virginal Gloria Harper, who keeps throwing that up-from-under look at him from her desk at the car lot. But things about Gloria don’t seem to add up. For one thing, there’s this sleazy creep Frank Sutton (William Saddler) from outside town who seems to have an undue influence over her. The same creep that always seems to show up with camera in hand whenever folks let their guard down and let their animal lusts take over.

What’s a guy to like Harry Madox to do?

And that’s where the trouble really begins.

I've probably seen this movie five or six times since its release. It made no money at the box office, and I’m not surprised. A film like this is only going to appeal to a certain audience. That is, people who appreciate the source material it’s taken from, like those old paperbacks that lined the truck stop and drugstore turnstiles back in the 50s and 60s. Charles Williams was one of the past of the paperback writers of his time, right up there with writers like John D. MacDonald and Jim Thompson. Some of his other novels have made it to the screen, notably Dead Calm back in the late 80s. You can find Hell Hath No Fury fairly easy since it was republished by Black Lizard as The Hot Spot back in the 90s.
Posted by Kurt at 7:11 PM