2012 contained The Summer of Westerns for me. Toiling away at what-shall-remain-a-nameless-insurance-company by day and working on my writing / editing by night left me looking for escape. Thanks to some on-line recommendations I started reading old paperback westerns.


In no particular order here is the list of novels I devoured: 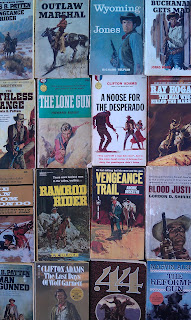 While some of the above novels were better than others, I can honestly say there was not a bad book in the batch. Most were published in the 50s and 60s and for an average of a dollar a book, I got a bang for my dollars. I also got to discover some new writers (new to me!) that I will definitely be on the lookout for in my used-bookstore trawls.
Posted by Kurt at 10:40 AM