Slaughter - "Don't hand him no jive!"

Slaughter from 1972, directed by Jack Starrett and starring Jim Brown, Stella Stevens and Rip Torn is one of those classic 1970s action movies that you don't see a lot of any more unless you deliberately seek them out. Maybe there should be a cable channel that shows nothing but classic action genre flicks from the decade... 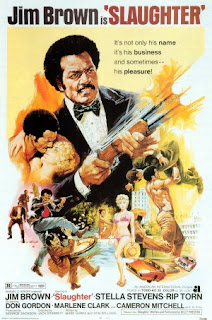 Anyway, Jim Brown plays Slaughter, an ex-Green Beret who returns home to find who is behind the car-bombing death of his parents and kill their ass. His father was reputed to have shady ties, and it doesn't take long for Slaughter to discover that local mobsters were behind the hit. While questioning a lady friend of his dad's, an attempt is made on Slaughter's life. The lady is gunned down but is able to give Slaughter a name before dying. Slaughter reacts quickly enough to dispatch  one of the goons, and promptly gets arrested for murder afterward. Instead of facing punishment, Slaughter accepts a deal by the agent in charge of investigating the local mafia, in return for leading them to the big hood in charge. It's one of those scenes you have to just go with and accept. Slaughter heads to Mexico where he meets his partner on the case, a quirky dude named Harry. They're looking for a criminal big shot named Mario. Slaughter meets up with a moll named Ann, played by a hot Stella Stevens, and the two of them immediately fall for each other's excessive charms. Meanwhile, a psycho named Dominick, played by Rip Torn, is making his play to take over the criminal real estate run by Mario. Mario comes off as something of a ponce more than a bad-ass, and is gunned down by Dominick and his goons while practicing on his tennis game. Slaughter goes through bad guys, gets chased through alleyways by cars, gets in knife fights on rooftops, guns down hoods in the street, shoots up a casino and beds the hot Ann in his free time, culminating in an explosive showdown with the psycho wild-haired Dominick.

I liked this movie a lot, and enjoyed Jim Brown's performance as Slaughter. He carries the role in a charismatic style that will easily have audiences rooting for him. The man's got swagger to the nth degree in this flick and is one bad-ass Motherf***er to boot! The plot has holes, but there's plenty of sex and action to overlook them, not to mention tons of terrific dialog. Rip Torn is a bad guy that you can't wait to see get his ass handed to him. Stella Stevens was in a number of movies from this time and basically played the same role in each one, but is enjoyable to watch.

The film was successful enough to lead to a sequel, Slaughter's Big Rip-Off, which I'll have to catch.
Posted by Kurt at 7:07 AM

Email ThisBlogThis!Share to TwitterShare to FacebookShare to Pinterest
Labels: men of action, movies