There seems to be a collective amnesia with people my age when it comes to this Saturday morning TV show. Maybe it’s because it had a short life on television. It went on the air in 1970 and only lasted to 1971. 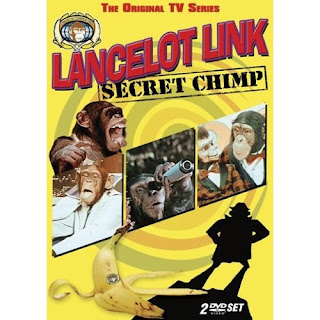 Lancelot Link was a secret agent for A.P.E. (Agency to Prevent Evil) whose arch nemesis was Baron von Butcher and his chauffer, Creto who were agents for C.H.U.M.P. There were also various other villains who regularly popped up to create chaos for our heroes. Lancelot Link’s female partner was Mata Hairi, who may have been as a much a master of disguise as Lancelot.

In addition to his duties as a secret agent, Lancelot Link was also in the rock band The Evolution Revolution. Real swingers, clearly. Mata Hairi played the tambourine as all girlfriends do who are allowed to be in the band.

There was also the host, Ed Simian, who would introduce the Evolution Revolution. Ed Simian would also typically end up spinning in a wild dervish before the camera cuts to the band’s performance, which used to crack me up.

I think it’s odd that no one seems to remember this show now. There were the usual merchandized tie-ins, mainly children’s lunch boxes.

Maybe this post and the video will jog some memories…
Posted by Kurt at 4:02 PM