The little .22 settled on a point of aim and his finger put pressure on the trigger. I was aware of the strangled breathing of Harold Mooney watching fearfully and making no effort to intervene. That was all right. I didn't want any help. I just wanted to get my hands on Karl Kroch. At that moment he had no information anybody wanted. I didn't have to treat him gently. I didn't have to catch him and preserve him like a delicate scientific specimen. I could smash him like a cockroach, and I was looking forward to it; and I didn't care how big he was or how many guns he had. He was dead. 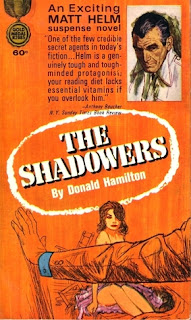 The Shadowers, from 1964, is the 7th novel in the Matt Helm series, and picks up several months after the events which occurred in The Ambushers. Matt Helm is on vacation in Florida under the guise of Paul Corcoran, a reporter from Denver. He's supposed to be spending a month of fun and sun with his girlfriend Gail Hendricks. You may remember Gail Hendricks as the spoiled Texas socialite from the 4th novel, The Removers. I wasn't much of a fan of Gail Hendricks, and couldn't see why Matt Helm would fall for her. Well, turns out someone else wasn't much of a fan either, because as this novel starts up, Gail Hendricks has been killed in a car accident. Helm is taken to the scene of the accident by the police and looks for signs of foul play but is unable to determine any. Speed and alcohol seem to be the only cause.

Shocked and saddened by Gail's death, Helm calls up his boss Mac and asks for an assignment. Mac obliges by sending Helm to New Orleans, where he follows through on a series of elaborate maneuvers, signals and pickups, all to determine if he is being shadowed, as he makes his way back to Pensacola Florida. Helm's trip to New Orleans and back to Florida is something of an elaborate ruse in preparation for his assignment, to find and kill a man known as Emil Taussig. Taussig is responsible for multiple shadow operations throughout Europe, and has now been spotted in the United States, in Pensacola Florida. It's believed that Taussig's current target is Dr. Olivia Mariassy, an aerospace physician.  .

Mac said, "The exact nature of the Pensacola target is irrelevant. The important thing is that there is one, and that a number of valuable people, Dr. Mariassy included, are in danger, and that we must find Taussig and stop him before he gets all his agents in a position to act."

Helm's assignment is to stick by Dr. Mariassy's side and find out who is shadowing her. "You will determine if she is being shadowed. If she is, you will lead the shadower into a suitably isolated spot, safe from interference by the police or anybody else, and learn from him, or her, the whereabouts of Emil Taussig." Accomplishing that, Helm is directed to kill Taussig.

It's determined the best way for Helm to accomplish his assignment is to marry Dr. Mariassy while keeping his guise as Paul Corcoran. Dr. Mariassy agrees to the marriage charade. Mariassy is described as one of those "schoolmarm librarian types" and has a way of instantly annoying Helm, providing many opportunities for him to act like a bastard toward her. This is a recurring theme through all the books so far. Helm has to work with a woman who may or may not be on his side, and he treats her like shit in the process. It's his way of impressing upon them the ugliness of his world. And of course, it never really works because without fail, the women respond to Helm's brutal charms.

Events in The Shadowers are linked to the previous novel, The Ambushers, but you don't necessarily have to read that book first. There are also a lot of references back to the earlier novels, particularly in reference to Helm's relationship with Gail Hendricks and his wife Beth, from Death of a Citizen. The Shadowers features a great villain named Karl Kroch. Kroch is one of those sadistic Nazi bastards who takes pleasure taunting Helm throughout the novel whenever he isn't raping and killing the women who are unfortunate enough to orbit Helm's world. Kroch's vendetta against Helm relates back to Helm's previous assignment. As in all of the novels before, Helm can't really trust anyone completely. Not even his new "wife" Dr. Marassy, who seems to have too many secrets. Tagging along on the assignment is Mariassy's former lover, Dr. Harold Mooney. Mooney plays just enough of a wild card in the deck to throw the assignment off the rails more than once. Also joining into the mix is Antoinette Vail, a young woman whom Helm pulls in as a decoy early on in the case.

Continuity plays a bigger role in this novel than the ones before it. We also see Helm beginning to express misgivings in his abilities as an agent. More than usual, he makes mistakes in The Shadowers which result in deadly consequences. There is even a moment of reflection, considering the death of Gail Hendricks, and the events resulting in this current assignment, where Helm thinks of leaving the game. Such moments are brief, however.

This novel was published in February 1964, and by this time Gold Medal Books had found a niche publishing series novels featuring Travis McGee, Chester Drum, Sam Durell and Matt Helm. The popularity of series characters like Matt Helm meant something of an end to the stand-alone, noir paperpacks that Gold Medal was known for in the 50's. Writers like Dan J. Marlowe, Steven Marlowe and Edward S. Aarons, along with Donald Hamilton, began turning out espionage adventures rather than straight crime novels as they'd done in the 50's. John D. MacDonald's Travis McGee was an exception, considering that McGee stuck to the basic "private eye" formula. So did Richard Prather with his detective hero, Shell Scott. Dropping off the paperback shelves were writers like Gil Brewer and Harry Whittington and Day Keene. The series character had arrived and was here to stay.
Posted by Kurt at 4:48 PM