I raised both arms and swung the heavy buckle at the end of the strap. It sang through the air like one of the Japanese noisemakers you whirl on a string. It caught him just right, squarely across the face, and with that much power behind it, the foil made no difference at all. I couldn't have done better, or worse, with a machete. 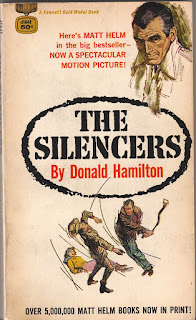 Just like the cover depicts, some bad guy gets a Texas-sized belt buckle right in the chops. In this case the bad guy really, really had it coming to him.

Continuing the Matt Helm series, from 1962 is The Silencers. This is the 4th novel in the series and Helm has fully assumed his role as a government agent assassin. All vestiges of his civilian life are gone. Even the bad guys now know his reputation. This novel looks back at the first novel, Death of a Citizen, for inspiration by bringing back one of the agents from that novel who played a role in tailing Helm as he was pulled back into the spy business. That agent is named Sarah. Sarah was a rookie at the time of Death of a Citizen. Now Sarah has a couple years of experience behind her and is on assignment in Juarez, Mexico. Unfortunately, she's in over her head on something down in Juarez, and it's Matt Helm's assignment to extricate her from Mexico, by any means necessary. Helm has some uneasiness about this assignment. He remembers Sarah as a somewhat amateur agent, prone to emotions and reactions that could easily get her, and others with her, killed. He hopes that he doesn't have to resort to extreme measures in "rescuing" her from whatever hot water she's gotten herself into. Just exactly what that might be, he isn't told. His boss Mac informs him that he doesn't need to know the particulars of Sarah's assignment, just that he has to bring her back to the U.S.

In Juarez, Helm finds Sarah working "undercover" as a stripper in a seedy nightclub. He and a partner for the assignment watch as Sarah performs her dance of the seven veils for an odd assortment of patrons, including a well-dressed American socialite and her Texas cowboy boyfriend. Sarah barely gets into her routine when someone in the audience throws a knife, burying it "hilt-deep" into Sarah's back. All hell pops and Helm rushes to the stage to discover that the well-dressed socialite has gotten to Sarah ahead of him. Sarah whispers something to the woman and then dies. By then, bullets fly and the crowd disperses, leaving Helm with the socialite, who claims that Sarah was her sister. Helm pulls her out of the nightclub and takes her back with him to El Paso. On the way he learns that her name is Gail Hendricks and that Sarah was her somewhat wayward sister whom needed rescuing from a squalid life south of the border. Of course, Matt Helm smells a rat. Back at their hotel in El Paso, he's convinced that Gail is hiding more from him than whatever it was Sarah whispered as she was dying. Forcing her to strip, he finds a container of microfilm in Gail's bra. This leads to a whole scene of dominance and humiliation and dialog that becomes a standard theme in the Helm novels.

By this time, Mac shows up in person from Washington D.C. and the two men play a sort of "good-cop, bad-cop" routine on the terrified Gail Hendricks. Matt Helm learns from Mac that Sarah had "gone over" to the other side and that the microfilm involves government plans having something to do with military tests conducted in New Mexico. Also figuring into the whole sordid affair is a shadowy figure known only as "The Cowboy" who has been wreaking havoc on the espionage games. Matt's new assignment is to find "The Cowboy" and kill him. It's now believed that The Cowboy just so happens to be Sam Gunther, the gentleman last seen with Gail in the nightclub where Sarah was killed. Mac's theory is that Gail Hendricks will bring The Cowboy to Helm. In addition, Helm and Gail will follow Sarah's dying clue into New Mexico to some place called The Wigwam somewhere in Carrizozo.

What follows is a road trip through New Mexico and pages of head games between Matt Helm and Gail Hendricks. Helm turns the male chauvinism meter to 11 in this book, figuring the more he can make Gail hate him, the more willingly she'll betray him to The Cowboy. This means we get to hear more opinions about women in pants, how silly they behave in the spy business, how ridiculous they dress in the winter, you name it. If you've read any Helm novels, you know that Helm makes no bones about his chauvinistic attitudes. Unfortunately, the role of Gail does nothing to help her cause here. Her dialog is full of  silly phrases like "I declare" and "you brute" and "you beast" to the point that even Scarlett O'Hara would have pitched her off a cliff. Even poor, dead Sarah gets little respect, as we're to believe that she turned sides merely because of a stud in a cowboy getup.

If you can get past the dated attitudes though, you'll get another decent cold war caper from the sixties. I don't think The Silencers was as good as The Removers, but it's still a fun read if you like this type of novel. 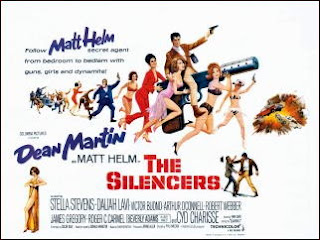 The Silencers was the inspiration for the first Matt Helm movie starring Dean Martin, released in 1966. Everyone knows that those movies were silly spoofs of the Jame Bond films. They're tough to watch now, but I liked them when I saw them on TV as a kid.