So, two weeks into 2018 and it's not looking like sanity in the real world is returning anytime soon. I've made some resolutions this year, something I don't normally bother with, and one of them is to ignore the news as much as possible. Those who know me personally know my feelings about the direction we've turned in the country and this corner isn't the place to dwell on it. So I've chosen to escape the early weeks of 2018 into the canyons and valleys and deserts found in some vintage westerns I've had on my shelf. 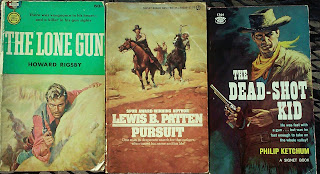 The first one is The Lone Gun, by Howard Rigsby, from 1955. My book is a Gold Medal paperback, something that nearly always guarantees a good time. The Gold Medal westerns, in my reading experience, tend to lean hard-boiled, which I like. The Lone Gun falls right into that vibe. Brooks Cameron works for Dave Tilton, tight-fisted rancher, who runs the town which is appropriately named Tiltonville. Brooks has been with Tilton long enough to earn a good rep with most of the townsfolk. Brooks has ambitions of marrying Mary Silk, the reverend's daughter (a preacher's kid! hubba hubba!) and staking out a ranch of his own. Competing for Mary Silk's attention is the local sheriff, a bully named Adam Lufkin. Lufkin wields his authority by railroading anyone he doesn't like with whatever trumped up charges he can come up with. One day, returning from a cattle drive, Brooks Cameron has an argument with Dave Tilton on behalf of the other workers waiting to get paid. In a fit of anger, he quits on Tilton. Unfortunately, he does so in front of Tilton's brother and Sheriff Adam Lufkin. By next morning, Dave Tilton is found murdered, and the money from the cattle drive is missing. Guess who the number one suspect is. If you guessed Brooks Cameron, you've clearly been to a rodeo or two! What follows is a long...sometimes too long...ride on the lam for our hero Brooks Cameron, as he tries to find Tilton's real killer while evading the Sheriff and his henchmen. It's a pretty good novel, with my only gripe being some clear page filler with Brooks just hiding out and plotting his next move. Finding the real killer takes some time and there are a number of false trails getting there. Still, there is enough suspense to carry the plot, and you look forward to that bastard Adam Lufkin getting his comeuppance.

The next western trail I rode is Lewis B. Patten's 1957's novel Pursuit. I've read a few of Patten's other novels and some short stories and, so far, I've liked them. I understand, from others who know the genre better than I do, that his later novels from the 70's tend to be a mess. I've kept that in mind when looking for his books. Pursuit could have been a mid-century crime novel, as it begins with a robbery of a stage coach. It could have easily been updated to a payroll robbery. Four strangers ride into a town named Buffalo Wallow and proceed to hold the town hostage as the stage arrives. Casey Day is the fellow in charge of the way station, and is taken hostage as the bad guys shoot up the place and take off with the money. Turns out that Casey Day is accused of being in cahoots with the robbers, because this is the second time in his career that a stage got robbed under his watch. What follows is a...Pursuit! This pursuit goes all over hell's creation and takes nearly a year to resolve. Casey travels far and wide looking for the outlaws, taking them down one-by-one and returning the stolen money. It's an obsession that he won't let go of, even while he's got a willin' gal waiting for him back in Buffalo Wallow. I liked Pursuit a little better than The Lone Gun, while the plots were pretty similar. However, Casey Day isn't a particularly likable hero and a bit hard to relate to. But there are some really good bad guys in it, and the minute-by-minute robbery detailed in the first half of the book is nicely done.

Finally, I ended the triple-feature with The Dead-Shot Kid by Philip Ketchum, published in 1959. This is the first time I've read anything by Philip Ketchum. Same goes for Howard Rigsby, above. This one is the best of the trio, with our hero Johnny Durango (now that's a hero's name!) surviving an ambush on a cattle drive and facing a valley run by an evil bastard named Dab Bassett. Bassett has sent out his gang to steal a herd of cattle that Johnny Durango is riding with. Durango survives a shootout with a pair of Dab Bassett's henchmen and proceeds to go up against the valley alone. This one had a nice sense of pacing throughout. I will say that maybe, just maybe, not enough space was devoted to Dab Bassett himself. But that's a minor gripe, as there are plenty of fists and guns to making up for Bassett's absence. There is even a romantic angle involved as Johnny Durango gradually forms an ally with Glynn Webster, the lonely wife of one of Bassett's gang.

So there it is for now. I got my fill of westerns for the time being, and some relief from the ills of the world in the process. Here's looking at better year ahead for everyone.
Posted by Kurt at 9:47 AM

Email ThisBlogThis!Share to TwitterShare to FacebookShare to Pinterest
Labels: men of action, western