Voyage of the Space Beagle - A. E. van Vogt

The drive was on. The ship was accelerating, going ever deeper and faster through the gulf of blackness that separated the spiral galaxy, of which Earth was one tiny spinning atom, from another galaxy of almost equal size. That was the background to the decisive struggle that was now taking place. The largest, most ambitious exploratory expedition that had ever set out from the solar system was in the greatest danger of its existence. 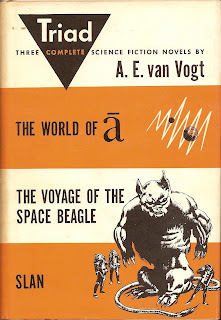 Continuing on with the 2nd novel in my old copy of Triad by A.E. Van Vogt, we get to what is probably regarded as his best "novel." I'm guessing that most people think of this one as his best novel simply because it's mentioned more frequently in articles and essays about him than his other novels, like The World of Null-A. I put "novel" in quotes because it's really built from four of his short stories published during the Golden Age of Science Fiction. And these were some of his best stories, as long as you're asking me. Most of A.E. van Vogts "novels" were built from previously published short stories. Building a novel this way can come with some hurdles. They're often awkward and poorly paced. I think I read somewhere that A.E. van Vogt intended a climactic bit of action approximately every 800 words in any given story. This leads to a breathless pace that is hard to maintain for an entire novel. I've also read that some of his stories were inspired by dreams, which is another hurdle to leap if you're going for continuity and logic. But that's all stuff for the critics to bicker over.

Voyage of the Space Beagle is probably the best novel to read if you're going to read anything by van Vogt. I say this with a caveat that his short stories, particularly the early ones like "Black Destroyer" are better in their original forms. Voyage of the Space Beagle begins with "Black Destroyer" which was first published in Astounding Science Fiction way back in July of 1939. I first read "Black Destroyer" in a collection called The Great SF Stories 1 1939 published by DAW books in 1979. That collection was edited by Isaac Asimov and Martin H. Greenberg, and was the first of what was planned to be a year by year gathering of the greatest Science Fiction stories, as chosen by the editors. I bought that paperback the year it was published and was absolutely enthralled by the stories in it. 1939 was deliberately chosen by the editors as being the launch of what is known as the Golden Age of Science Fiction. If you happen to see any of these DAW editions of The Great SF Stories I'd say grab them, because you're guaranteed some excellent reading. I still have the first 7 books in the series, and wish I had more. As far as I was concerned I needed no other Science Fiction anthologies with these coming down the line. Unfortunately I missed the last half of the 40s and later.


"Black Destroyer" just might have influenced the creators of the movie Alien, directed by Ridley Scott. Same can be said for another story "Discord in Scarlet" that makes up part of the latter half of Space Beagle. If you have a chance to read "Black Destroyer" do it. It's an excellent example of A.E. van Vogt at his best. It's that whiz-bang action science fiction pulp adventure that nerds like me love. Basically, an expedition from Earth lands on what they believe is an extinct planet and finds a lone cat-like creature outside the ruins of an ancient city. They let the creature board their ship only to learn in horror that it intends to feed off them as it takes control of their ship.


As for the Space Beagle itself, we're told that it's manned by approximately 1000 men, made up of both scientists and military personnel. Yup, I said men, because the Space Beagle is a sausage factory. There isn't a single female on board. Maybe a poster or two of Jean Harlow over a bunk, but definitely no women. In order to manage an expedition so long without women, the men have taken some kind of drug that inhibits their libidos. Apparently women would be just too much of a distraction and there'd probably all kinds of fights over them going on and stuff like that. Or, in the future, according to A.E. van Vogt, women just ain't cut out for interstellar explorations. I suppose I should mention that one might think Voyage of the Space Beagle influenced Star Trek. Perhaps, but who can say. Certainly their exploratory missions sound similar even if the Enterprise had women on board.

After the events of "Black Destroyer" are settled we get into some of the politics of the Space Beagle. Our hero of the novel is a Nexialist scientist named Grosvenor. He's the only Nexialist on board, so he's got to deal with a bunch of professional rivalries and power plays. But through each of the adventures, it's always Grosvenor who comes up with the best solution. Grosvenor and Nexialism is the glue that holds the episodic structure of the novel together. Nexialism is described as "joining in orderly fashion the knowledge of one field of learning with that of other fields." It works better here than other cobbled together novels by the author. The individual pulp stories fit together with more elegance with Grosvenor as a lead protagonist.

The two other stories making up Space Beagle's adventures are "War of Nerves" from 1950 and "M33 in Andromeda" from 1943.


I had a good time reading the book. I'm not totally jazzed on the title. I remember a friend of mine years ago seeing my paperback copy of Space Beagle (seen here) and cracking up at the cheesiness of it. I can't really blame her. It's kind of a clunker of a title and the dude on the cover always reminds me of Major Matt Mason. You've got to be of a certain age to know who Major Matt Mason is.

That's about it for A.E. van Vogt for now. I still have Slan to read in my collection, but I'm about pulped out with his novels, so I'll spare you a triple play. I will get to it eventually though.
Posted by Kurt at 11:07 AM